Here at Digital DJ Tips, our ethos is simple: DJing should be done digitally, and you should be able to fit all your DJ gear in a bag. That means a laptop, a controller, and anything else that will fit in the pockets and compartments of your DJ trolley, backpack or shoulder bag, such as headphones, soundcard etc.

Your controller is probably the most important choice you’ll make when it comes to DJ equipment, and it’s an intensely personal one. You can get by with any old laptop as long as it has the power to do what you need it to, but the controller is literally going to be in (or at least under) your hands all the time when you’re DJing.


Kudos to Hercules for being there at the start. I was working for IDJ magazine at the time (end of 2004) and they sent me this to review. To say it blew my mind was an understatement – to be able to control music like that was totally new to me. I was about to move countries, so personally the idea of not having to carry records around but still DJ was fantastic. Plus I’d never taken to CDJs.

I was DJing every Saturday night in a club at that time, and immediately started using the Hercules there, to many strange looks. It crashed a couple of times, but I always had some vinyl lined up “just in case”.

After a few weeks, though, it started to irk me. This was essentially a cheap, plastic unit; a lightweight, toy-like thing. The cueing was spongy. The unit was too small and I knocked the wrong controls when I was trying to do things. I was sent the MK2 by IDJ mag too, but same thing – it didn’t impress.

(Since then, I’ve used the Hercules RMX, just recently when my current controller was off for repair. It’s their top-end unit and while not professional quality, it’s very good for the price. Well done to Hercules for staying in the game.)

DJing with all kinds of kit


What happened next was curious, though: I was hooked on Virtual DJ, the software that came with the MK1. (I’d tried Traktor, but found it a bit gimmicky and not very user-friendly.) Virtual DJ, with its big waveforms and cute skins, was great fun to use. I was so hooked, in fact, that I bought the full-power version.

I still needed a controller though, so I tried DJing with an Evolution UC-33e I had knocking around, and even an M-Audio O2 controller. (Cue more weird looks from the clubbers. DJing with a piano keyboard?) Nothing did it for me, though.

Who needs a controller anyway?
What I ended up doing was realising I didn’t need any extra kit apart from my laptop at all. I spent a day programming Virtual DJ to work with my keyboard using custom shortcuts, mirror-imaging the computer keyboard down the middle to give myself a left and right deck set of bass, mid, treble, kills, nudges, skips and sync controls. I put samples along the function keys and anything else I could think of, including a crossfader, on the other keys. From then, I DJed in the club with just the laptop. I bought an Indigo DJ soundcard that plugged into the VCI slot of the laptop, so literally I just had to take the laptop and some headphones to gigs with me. (Cue more very weird looks in the clubbers.)

This set-up actually served me well for five years, DJing on and off in bars, parties and the odd club (I’d moved to Spain by then and was busy doing other stuff too). I loved Virtual DJ, and it was easy to set this up on any laptop, as long as I kept the XML for the keyboard shortcuts handy (I lost it once and had to program the whole lot again from scratch). My laptop WAS my DJ controller. As I am not a scratch DJ and don’t often scratch (maybe with acapellas a bit), it didn’t bother me to much.

Meanwhile, I kept an eye on the developing controller market, but nothing grabbed me enough to dip in again.

The seven year Itch
(Well, six years actually, but I couldn’t resist the subheading.) When I decided to DJ a bit more often again, I wanted to get the tactile “fun” back into it, and so I started looking for a high-quality controller. I was being paid for my gigs, so I could justify spending what it took (which meant a new MacBook Pro, too. Hard life…). Once I had the MacBook, I wanted a controller/software combination that “just worked”, and was drawn to Serato Itch. I had to think long and hard about abandoning Viurtal DJ, which I loved, but took the plunge and went for the Serato Itch / Vestax VCI-300 combo.

(I’d had my eye on the VCI-100 and played with it enough to know it was the real deal, but meanwhile had fallen for Itch, so my controller choice was limited, especially as the fantastic Numark NS7 was far too big to carry around on my shoulder.)

The VCI-300, apart from being well built and having well-spaced controls, is simple, simple, simple. The jogwheels are a complete joy, the touch sensitivity means scratching is easy, and the way the jogwheels have two functions depending on whether you touch their edge (like a record edge) or their top (like a record’s surface) is fiendishly clever and not repeated by any other manufacturer that I know of.

You forget you’re using it and enjoy the music, the selections, the night, the people – everything you should be enjoying as a good DJ. It feels almost TOO simple, and indeed on-board FX control would have been nice, but it’s a 9/10 for me. And that brings us up to date…

The next two years will be really interesting…


My point is that digital DJing lives or dies by the quality of its controllers. DJing with just the keyboard is clever and convenient, but DJing is a lot about playing with controls at the end of the day.

Forget the big, cumbersome CDJ-2000s and that route. Yeah they’re standard in superclubs and the old boys love ’em, but it’s still shoehorning new technology into old. You don’t need that stuff any more. And while we’re at it, virtual vinyl is great if you already have decks or are a diehard scratch DJ (yawn), but really, would you go and buy decks then a DVS? They don’t even MAKE Technics any more, for Pete’s sake. There are iPod DJ controllers (see first pic) too which have a certain appeal, but it’s nice to have a proper display.

No, the way forward is proper laptop-driven DJ controllers. Vestax already have lots of spin-offs (sorry for the pun) of the VCI-100 and VCI-300, no doubt with more to come. Allen & Heath’s DX is interesting for the 4-deck technicians who want to have a a few tricks up his or her sleeve – although that jogwheel looks like an afterthough to me. There are loads of quality controllers coming out, but the point is, there’s no industry standard yet, and that’s exciting. The reason is that while the popularity of digital DJing will certainly mushroom when everyone unites behind one standard set of features (if not one standard manufacturer), in the meantime – who knows what will happen next?

Another very interesting development, is DJing with digital audio workstations (DAWs), led by Ableton, which itself has got some very tasty controllers. This changes the very nature of DJing in that all of the beatmatching and “vinyl” control is gone. I am planning to invest some time in this area and am looking at the Akai and Novation controllers to see what these can bring to my performances, so watch this space on that one.

So – which controller to use?
So, what has all of this spending and experimenting led me to conclude, kit-wise? Well, I can only recommend what I’ve used, and so my current recommendations to new DJs go like this:

If you don’t have much cash, get the Hercules RMX, which comes with a version of Virtual DJ and has a built-in soundcard. It’s a well-built, solid unit which, while lacking the finesse of the VCIs, will last you a long time and won’t make you look stupid in pubic (obviously an important thing.) Don’t buy anything cheaper. It will probably break. You’ll definitely end up hating it.

If you have a bit more to spend, especially if you want to play with scratching digital files, go for a Vestax. Go for the VCI-100 if you think Traktor will be the DJ software for you (although you’ll need a soundcard, and here I still recommend the Indigo series for sheer convenience), and go for the VCI-300 if you think Serato Itch will be better.

(Regarding the software, Itch is the one for you if you prefer to just “let the music play”, Traktor has got more tricks up its sleeve but sacrifices ease of use.)

Whichever option you go for, try and look at and play on the kit first. Like your bed or your shoes, a DJ controller badly chosen will cause you no end of strife. Pick carefully, and come on inside. It’s a lot of fun over here on the right side of the digital divide!

Are you looking for your first controller? Have you DJed on weird and wonderful Midi equipment over the years? Did you buy something you ended up wishing you hadn’t? We’d love you to share your thoughts. 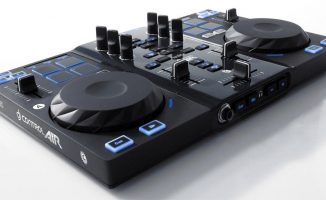