If you buy a DJ controller, chances are it will come with some bundled DJ controller software. These programs are stripped-down versions of “grown up” DJ software, by the same manufacturer as the full version.

It’s a bit like when you buy something electrical, and there are some cheap batteries with it. Or a printer with a toner cartridge that’s only 1/4 full. Or ever a new computer, which has trial versions of full software on there.

Except because the only thing your DJ controller can do is control DJ software, they can hardly give you a full version that just stops working after a month. So they give you a stripped-down or “LE” (for “light edition”) version instead. (This type of software is sometimes referred to as OEM, for “original equipment manufacturer”.)

Such software will normally be configured to work out of the box with your chosen controller, and LE versions aren’t normally available separately. And while you can often get free upgrades to paid software, you can’t with LE versions – you’re stuck with what they give you even if the parent program is being continually developed.

The thinking, of course, is that you’ll get used to the software, while simultaneously starting to wonder what it would be like with the paid-for version with all functions are enabled.

Do I really have to upgrade?
It’s a question we’re often asked here at Digital DJ Tips, and knowing whether the software that comes with a certain DJ controller is going to be good enough for you at least for a while is a big consideration when you’re choosing what to buy. Bear in mind that you can often upgrade to a half-way house – Traktor has Traktor Duo which is a two-deck controller rather than four decks with Pro, and Virtual DJ has Virtual DJ Home and Virtual DJ Basic as well as its Pro offering.

For this article we’ve compared the “free” versions with the full-blown top of the range versions. As nearly all DJ controllers are bundled with either Traktor or Virtual DJ (although Serato Intro has just arrived, you can’t upgrade that at the moment to the full version of the software), these are the two pieces of software we’ll consider in detail.

The main differences between Traktor LE and Traktor Pro are two decks instead of four; limited effects; no effects chaining; no hot cue buttons; no play history (so you can’t look through old sets); and limited advanced loop/beat jumping ability. Furthermore you can’t use the autoplay, and there’s no facility to record your mixes. There’s also no ability to custom map Midi (ie you can’t start changing what the controls do to suit your style – or to suit another controller in the future).

What would annoy me: Not being able to record your set is a big one, and no playlist history means you can’t look back over the night’s mix the next day to jog your memory about what worked and what didn’t. Once you start to get your DJ technique nailed, you’ll want some of the loop and cue functions they’ve missed out – and some more effects would be nice. Autoplay would save having to mix every tune when you’re just listening at home.

Comparision chart on the Traktor website
Approx. cost of upgrade to Pro: US$129 (against US$199 off the shelf)

Here you get either two or four decks. You can’t make playlists in the software so you’ll have to do this externally (in iTunes, for instance), and the automix is again disabled – no letting Virtual DJ LE warm up the crowd for you! Sometimes no recording your mixes, either.

Virtual DJ is known for its video capabilities, but not in the LE version; you need Pro for full-screen video. You can’t “map” the Midi (ie reassign controls), or use an external hardware mixer – it will only work as they intended it to with the DJ controller it came with. Another interesting limitation is your access to the best bits of the online forum, and the inability to download “skins” to make it look how you like.

What would annoy me: I’d want to be able to record my mixes, and I’d wonder what I was missing in the forum. I’d miss being able to make it look like I wanted – even though I’d probably revert to the skin that came with it in the end! I’d miss automix too, because it’s sometimes nice to let it just play through your set in the house rather than stand there mixing.

Comparison chart on the Virtual DJ website
Cost of upgrade to Pro: US$99 to US$249 depending upon equipment bought with (against US$299 off the shelf)


Do controllers ever come with full software?
Yes. Recently DJ controllers have started to appear with fully featured software supplied. Serato started it with Serato ITCH plus dedicated hardware such as the Vestax VCI-300. Obviously you are paying for the software in the price of the hardware here, and you can actually download such software for free because it is useless without compatible hardware.

Also, with controllers like the Pioneer DDJ-T1 and the new Numark 4Trak, you get a better-than-LE version of Traktor, which while not as good as Pro, is much better than “standard” LE.

So – will I choose to upgrade if I buy a controller with LE software?
The bottom line is that yes, you will probably upgrade in the end. But if you’re not sure, here’s one piece of advice: go and download the trial version of the full software from the manufacturer’s website. You can then try it out (30 minutes at a time with Traktor, for 30 days with Virtual DJ) to be sure it’s worth the upgrade.

Do you understand why manufacturers do this, or does it infuriate you? Have you ever been “stung” by buying a controller not realising the price you have to pay for software? Let us know your thoughts in the comments. 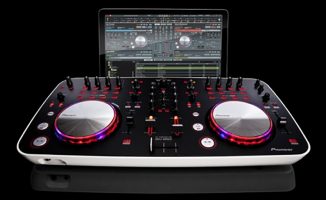 How DJ Software Gets Bundled With Controllers