Judging by the buzz on Twitter, this futuristic digital DJing video is firing everyone’s imaginations at the moment. And quite rightly – it’s like Minority Report meets the Northern lights. Visually stunning, what we have here is a large multitouch screen (called Töken) and multitouch MIDI controller software called Emulator that’s been developed for tablet Windows PCs, running Traktor.

As you can see from the video, it means a DJ who is running DJ software can put in a real performance instead of hunching over a laptop looking to all intents and purposes like a student checking his email.

Obviously this is a highly cool piece of kit. It would be absolutely fantastic to watch a DJ playing with this in a dark club, and I imagine the dancefloor would stay transfixed – at least for a while. Its novelty factor is sky-high. At the end of the day though, a touchscreen is never going to be as good to use as tactile controls (ie things you can touch, press, spin) and so the musical performance would probably suffer. Over on Skratchworx, reader Tobamai comments:

“The real benefit of a touchscreen is that you can change the interface in real time. You can have different pages of controls come up, like when he clicks between FX and the browser. The downside is that messing with controls isn’t as responsive as using a real switch or a fader (you can see he struggles with that a couple times in the video).”

Getting the balance between technology and performance right
But then again, DJing is a LOT about performance too, and you can certainly perform on this thing, as the DJ in the video shows. Another Skratchworx reader, Jam Burglar, came wittily to the only logical conclusion you can make about DJs relying on futuristic gimmicks for DJing: “If the DJ wore a Tron suit this would be next level. Without the Tron suit its just some guy doing the same old shit with a flashy screen.”

Will this help digital DJing to become accepted?
No denying it though, someone’s actually made digital DJing cool, which is something nobody else has really managed to date (club goers are 50/50 at best about DJ controllers, I don’t care what anyone says, much as I’d love things to be different).

Were this to catch on and get a few club installations, be featured in a music video or two, maybe the dancin’ public will realise that when a DJ has a laptop, he is actually doing this stuff even though they can’t see it.

What would Pete Tong or Deadmau5 make of it?
Someone once asked Pete Tong why he uses CDs when a laptop could do the same and he says “people expect you to be doing something” and a DJ using this is certainly conspicuously doing something. Remember too that despite his skills, deadmau5 has had to resort to Mickey Mouse ears to get some visual differentiation into what he does, which says something.

One thing’s for sure, though – there’d be no getting away with having a quick check of Facebook or firing off a sneaky tweet on this gear!

Do you think this is the future of digital DJing or just a gimmick? Let us know. 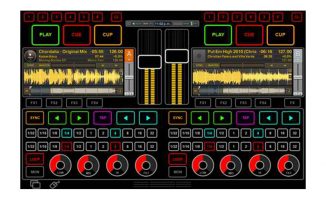 Even More Revolutionary Than The Touchscreen Traktor DJ System?