Looks like the new Traktor Kontrol S4 hasn’t got everything its way: Announced today at the 2010 DJ Expo in Atlantic City, the Denon DN-MC6000 is an exciting four-deck DJ mixer and Midi controller with all the high-end features you could possibly imagine integrated into its sleek tabletop steel chassis. It certainly looks the part, being of predictably high construction quality and really cramming a lot into its 19″ rack-mountable frame.

The Denon DN-MC6000 will certainly appeal to Digital DJ Tips readers looking for that elusive perfect controller that can do all kinds of things but still be small enough to throw into a flight bag or backpack. It will likely appeal to you if you still have record decks and/or CD players to integrate with your digital setup, or if you want an installation mixer that all types of DJs can use as well as digital DJs. It would make a good centrepiece to such a versatile DJ setup.

And if you’ve been waiting for a high-end controller to work with Virtual DJ, this one’s had the thinking done for you, especially if you want to mix video, when your options are further reduced. In that case, having a unit like this that can happily handle audio, video or both is a godsend. Where it may well fall down is with the sheer number of controls crammed into such a small unit. Time will tell how easy this is to play with, but the booth and monitor controls look very close to the jogwheels to me, for instance.

Also, as DJ controllers get more advanced, the interplay between hardware and software will become ever-more important. I believe Serato has stolen a march here – the Serato ITCH software is uncluttered and a joy to use in collaboration with the dedicated (there’s the key) hardware, and so it remains to be seen whether any of these new four-deck controllers can usurp the Allen & Heath Xone:DX / Serato ITCH combination for sheer ease of use. I doubt the Denon DN-MC6000 will dare come in higher than it on price, that’s for sure.

The American Audio VMS-4 is on paper a competitor, being a great value four-deck controller with the Hybrid controller elements and multiple ins and outs, but its build quality lets it down. Then there are the aforementioned Allen & Heath Xone:DX and of course the new the Traktor Kontrol S4. Priced at US$949, the Denon DN-MC6000 will retail slightly cheaper than the S4, but at considerably more than the American Audio VMS-4. Things are certainly hotting up in the four-deck DJ controller arena!

Do you own a high-end “hybrid” or four-deck controller? Are you planning on buying one? Has this made you think again about shelling out for one of the other controllers? Let us know. 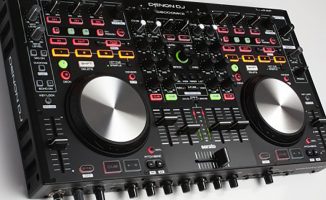 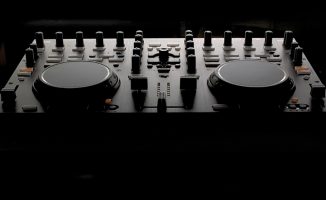 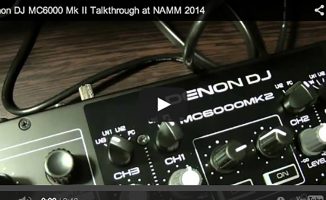