It’s always nice to attend DJ shows, meet people and see so many products in one place, and so today Digital DJ Tips navigated its way via plane and Skytrain to the Birmingham NEC – a mass of industrial estate glass, concrete and steel – in search of the beats.

Bodyswerving the Franchise Show, A Place In The Sun, World of Wood and the International Dolls House Exhibition, we finally found this year’s BPM and hustled in at 11am on the dot. It’s now the end of Day 1 and before we go and have some fun, I’m posting this dispatch from the closed cafe just outside. Aren’t you lucky?

A serious DJ show
Most of the big players are here – Numark, Vestax, Pioneer, Denon, Allen & Heath, Ecler, Native Instruments, Reloop plus software firms like Virtual DJ, MixVibes and Ableton, plus lots of interesting little companies, associations and publications round the main attractions. It’s the biggest DJ event in Europe so a great place to take the current temperature and assess the way things are going.

Digital is big, unsurprisingly (it’ll only get bigger) and Traktor was everywhere, Virtual DJ and Serato Scratch reasonably popular, with ITCH obviously only in attendance on ITCH hardware, including Allen & Heath’s Xone:DX setup (lovely controller, still. I want one). I saw very few turntables with real vinyl on them. Don’t think I saw one, actually. How times have changed. So, here’s what I DID see:

So I got a chance to look at the new Allen & Heath Xone:DB4.

It is a mind-blowing mixer for all types of DJs, but especially for digital jocks, for touring (as a straight Xone:4D replacement) and for running Ableton or Traktor with standalone controllers. Its onboard FX are mind-blowing, and it is extremely versatile with all inputs switchable to all channels.

I’ve got an exclusive interview with Allen & Heath coming up to explain their new product philosophy in more details, but suffice to say for now that it makes more sense in the flesh than it seemed to on paper – as I say, more to come on this.

It’s fair to say that Native Instruments’ Traktor Kontrol S4 controller is pulling the crowds, and it is indeed a well made, attractive unit, not least because it comes with improved Traktor software that it tightly integrates with.

I wonder about these controllers though – they’re too big to easily carry around and possibly fiddly to install in already crowded DJ boxes (especially if those DJ boxes already contain kit that can potentially control laptop software), and I suspect both will end up being used more at home or at parties than in straight, mainstream clubbing situations.
This was reinforced for me by the number of 2 x Pioneer CDJ2000’s-plus-a-mixer set-ups at the show being used simply to control Traktor.

This might, it seems, become the new digital DJ set-up of choice in big clubs. You’ll turn up and plug your laptop in and go from there. Where do bulky DJ controllers fit in to that scenario?

Virtual DJ 7 with 4 decks on show

Virtual DJ are at the show (for the first time I believe), and their stand was a tour de force of what’s good about their software – plenty of DJs happily playing on four decks using Virtual DJ 7 with audio and video, stamping Virtual DJ’s authority as a big player in digital DJing.

As if to make a point, they also had Virtual DJ running on just about every type of digital controller you can think of, from 4 x CDJ-2000s (to show off Virtual DJ 7) to the Vestax Spin, Vestax Typhoon, Hercules DJ Console 4, Numark NS7 and others.
I like Virtual DJ’s approach. They’re unashamedly populistic (they have a print copy of their PDF magazine Reloaded to give away at the show, with tips on how to mix two records together and beginner-friendly articles on things like headphones and budget controllers) and they’re bang on it hardware-wise (respected manufacturer Denon happily putting their logo on the DN-MC6000) so they obviously do something right.

Reloop’s Mixage: You can touch but you can’t hear

I got the chance to see the Reloop Mixage, which is billed as an entry level controller for Traktor LE (it’s Traktor certified, like the bigger brother Reloop controllers). It was only on show, though, so I couldn’t actually try it.

As we stated in our Mixage preview as linked to above, it comes both with and without a sound interface, but to clear up a misunderstanding, it isn’t meant to replace its bigger brothers in the Reloop range. It’s smaller and lighter (and presumably cheaper), but that’s not to say it isn’t well made and attractive.

Indeed, I was very taken with it, not least because those four big arcade-style buttons along the bottom of each channel are switchable using the shift function to be cue triggers, Midi Fighter style.

With good FX and loop controls, this is a great little entry controller. All the current Reloop controllers are good products, actually, and worth considering at their various price points.

It was nice to see these items as I’ve only read about them up until now. Taken together, they are roughly Stanton’s separates equivalent to a Numark X5 and 2 x Numark V7s 100% digital set-up, although appreciably cheaper.

The decks “spin” with high torque motors (Stanton go for 10″ vinyl not 7″) and they are well thought-out and innovative pieces of digital kit… but… but.. they just don’t feel right.

At this size, stuff has to feel solid, and for me this whole set-up is just a bit flimsy. Still if you’re after a Traktor control set-up with real spinning vinyl on real decks and can’t afford Numark kit, this is your alternative.

It’s not all about the kit…

The stuff round the fringes makes shows like these worthwhile.

I attended an absorbing session on using Ableton, with DJ/producer and Ableton expert Iain Horrocks. This stuff is the shit if you want to take your DJing to the next level. Akai also demonstrated Ableton as a DJ tool, cutting up Michael Jackson and Lady Gaga, and frankly it rocked. Is Ableton the new controllerism? Discuss!

I stumbled into what turned out to be a crash course in publishing digital music with Guenter Loibl of REBEAT Digital, explaining how DJ/producers can get their tracks out of the laptop and onto iTunes and start making money from them. This again is a subject that DJ/producers need to get their heads around, and in some way or form I’ll cover this in the future.

So – a good day. I’ll post a second part tomorrow with some of the more weird and wonderful things from the fringes of the show.

Tomorrow I’ll push some of the big boys and see if I can’t get wind of any new products. Pioneer claim their three new products were “a pair of headphones and two sets of speakers”, but we’ll see…

Were you at the show? Are you going over the next couple of days? Got any scoops we missed? Got any opinions on the above? Let us know! 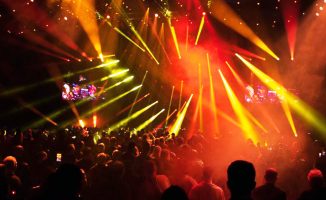