New digital DJs often get all confused about sound cards. What are they for? Why do I need one? Why isn’t my computer’s sound enough? Why do some DJ controllers need sound cards and some not?

Once they’ve worked out what they need, they then have to make the right choice. How many outs and ins do I need? Do some sound better than others? What’s “latency”? Do I need to worry about it? If I want to use four decks on Traktor, do I need a different card than if I want to use two? What if I want to use a microphone?

So with the needs of beginners in mind, here we’ll run through quickly what you need and why, before showing you 6 great value cards to choose from.

What you need to know about sound cards

For a more thorough discussion of sound cards, take a look at All About Sound Cards for Digital DJing. But here’s a quick resume:

Your laptop already has a sound card built in! Trouble is two-fold: first, its quality is probably not up to DJ standards, and second, it has one output, meaning just one place where you can plug something in to listen through – typically computer speakers or headphones. (If you don’t plug anything into the little headphone socket, it’s that same sound card that plays through the tinny little built-in speakers.)

To DJ you need TWO sound outputs. The first one – the “Master out” – goes to your speakers. At home, you may just use good computer speakers or powered monitors, and in a club, you may plug this one output into the mixer and then on to the PA, or straight into the PA amplifiers – but whatever, the first output is the one the audience hear.

The second, though, is the one YOU listen to on your headphones. Typically you’ll use it to listen to the next record and get it read to play, but whatever you choose to listen to through it, the point is that you’re listening to something different to what the audience is. Hence, you need TWO stereo outputs, that are separate from each other, to DJ with.

The fact that all laptops have only one stereo output is the reason why you need a sound card.

What the sound card does is disregard totally the computer’s built-in sound and replace it with at least the 2 high-quality stereo outputs you need for DJing. It is connected to your computer (usually by a USB cable) and more often than not, powered by the PC too.

Do I need a sound card at all?
Increasingly, digital DJ equipment comes with a sound card built-in, so check before you buy. There are loads of ways of telling: They tend to be called “DJ interfaces” rather than “DJ controllers” (although the latter applies to both types); and they’ll have audio-style sockets round the back (and often a microphone socket on the front),

If you’re not sure whether the controller you’re considering comes with a built-in sound card, just look it up in our DJ Midi Controllers: The Ultimate Buyer’s Guide 2011; they’re all clearly marked one way or the other.

Why might I want a separate sound card?
If you have a DJ controller that doesn’t have one, you’ll need one.

If you want to DJ with DJ software but using your laptop keyboard (ie with no external equipment), you’ll need one.

You may want the flexibility that a sound card offers you for expanding your set-up later.

Or you may be one of these people who thinks the sound cards in DJ controllers sound so bad that you’d rather have an external card!

What is “latency”? Need I worry about it?
All computer sound has “latency”, which just means “unwanted delay”. The delay between a command being given and the thing happening. For all the digital whizzing to go on and then the sound to finally appear in your speakers, there will be a few milliseconds’ delay.

It will depend on your sound card, the drivers (all these cards have modern Mac and PC drivers as applicable), and the system you’re running it all on. All of these sound cards have low enough latency for you not to have to really let that enter your thinking when deciding which one to buy.

What to expect at this price point

At the bottom end of the market, you get the basics. They all sound great, but there are few frills. Having said that, we’ve managed to find various extras that represent real value at this price point. Why you might want to do all these things is explained as we go along. They all have what you need, though: two separate outputs, one you can plug your headphones into and one you can send off to the public speakers.

None of these sound cards needs separate power – they all take their power from the PC.

They say: The Audio 2 DJ fills the need for a high quality, ultra-mobile audio interface for digital DJs using Traktor or other DJing and performance software. Even though it’s the smallest DJ USB sound card in the world, its two stereo outputs plus the ultra-loud output level and professional sound quality have enough punch to rock the world’s biggest clubs.

We say: A small plastic box with a couple of LEDs on it and a USB socket, two 1/4″ headphone-style jacks with volume controls. Plug one into your speakers, and one into your headphones, and you’re away. It is tiny, and sounds great – and that really is about it. The simplest sound card in our test – only we’d have liked a microphone input.

They say: DJ iO is a compact, portable audio interface expressly designed for DJs, mobile music producers and other musicians who work with computers. You’ll find DJ iO to be a convenient missing link in your setup because it connects easily with a standard USB cable to the computer and supplies extremely high-quality, 24-bit audio to output systems.

We say: Optical output is maybe useful for digital recording, but only 1/8″ headphone socket is a minus (although we’ve yet to buy a pair of DJ headphones that don’t convert to 1/8″). If you’re looking for a budget 4-in/4-out card, this is it. Would like to have seen a 1/4″ microphone input. No problems with sound quality – sounds great. Originally meant for recording, not DJs.

They say: Perfect for digital DJs on the road working with notebook computers. Simply use your favourite DJ software and Gigaport HD’s eight outputs as up to four different stereo channels, enabling you to mix, cue and add effects! Monitor and pre-listen to your signals via the two built-in headphone outputs.

We say: No driver required for Macs. If you want four stereo outs so you can use four decks (for instance) through an external mixer, and you want it at a bargain price, this is your card. The second headphone out is of dubious value, and a microphone input would have been nice.

They say: In its compact case, the U-MIX44 provides two stereo analogue input and two stereo analogue output channels with RCA connectors. It is a great tool for every DJ who owns a MIDI controller without a built-in sound card. The stereo headphone output, connected to Channel 2, provides professional monitoring for DJ applications.

We say: Best mix of features for the DJ at a great price of all of the sound cards here. Hardware volume for headphones, a microphone input, and switchable RCA inputs. A ground is always nice to have, and it’s in a robust case too. A bargain.

They say: With this small but powerful interface Reloop presents one of the smallest DJ soundcards that can be found on the market. The signal status LEDs allow visual monitoring so that everything remains in view and under control. Small, professional and always present: Plug and Play.
We say: Choice of RCA outputs or headphones and an RCA is switchable, and independent volume controls are welcome. Shame there’s no microphone input though. Still, this is a competent and compact sound interface for the DJ who just needs the basics.

For complete simplicity, the Audio 2 or Reloop Play are your choices. If you need a microphone as well, then look at the Numark. If you think you’ll ever need four stereo outs (probably to use complex software on an external mixer) your only choice here is the Gigaport HD. If you want two stereo ins as well as two outs, and nothing else, then the Maya44 is for you.

The best all-around card for us, though, is the Mixvibes U-MIX44. It has a lower spec of sound resolution, but you can’t hear any difference in real life, and it has lots of neat features like mic and monitor volumes, switchable line/phono on the RCA-ins and a ground attachment that show a lot of thought. However, that card is the winner among winners. Make sure the one you pick has the features you need and you really can’t go wrong with any of these.

What is your opinion on any or all of these cards? Do you think external sound cards are a good idea, or would you rather have your sound card built into your DJ controller (or mixer…)? Let us know in the comments. 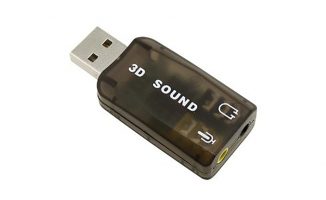 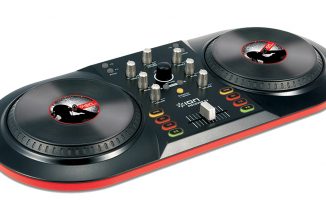 Your Questions: How Do I DJ On A Controller With No Phones Jack? 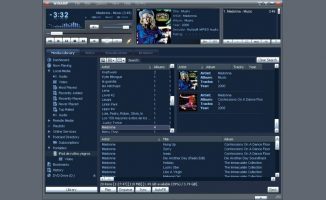 Over To You: Help Me Escape Being A WinAmp DJ!