Video from the CES

The Numark Mixtrack Pro was the big hit of the Christmas 2010 season, selling by the bucketload and setting the bar for affordable entry level DJ controllers. Now coming in at exactly the same price is the latest offering from DJ controller pioneers Hercules, the DJ 4Set, as leaked last week on Digital DJ Tips. But it has a feature up its sleeve that might well make it a “Mixtrack killer” for the French audio tech firm.

On show at the CES in Las Vegas this week, the DJ 4Set is priced at a competitive US$249, and offers much the same beginner-friendly feature set as the Mixtrack Pro (consumer build quality but great jog wheels and a built-in sound card) but with one crucial improvement – 4-deck mixing out of the box. The DJ 4Set is the same size and shape as the Hercules DJ Console RMX and Steel DJ controllers, and once this and the previously announced DJ Console 4-Mx hits the streets, Hercules will have both entry-level and more pro modern 4-deck controllers in its range.

As stated in our DJing predictions for 2011, this year looks set to be the year of 4-deck DJ controllers, and I can’t see any manufacturer launching any new controller from here on in without that capability.

The main advantage of these newer controllers (from all manufacturers, not just Hercules) is the vastly improved jogwheels. Jogwheels are the “touchy-feely” part of DJ consoles, and you can forgive much if a console’s jogwheels are responsive, touch-sensitive and well-made.

The much-touted new Hercules jogwheel design, as featured on both this controller and the more expensive 4-Mx, has double the resolution of previous ones. This means the wheels send more information back to the software when you do something on them, making for tighter control, more realist scratching and so on. They’re also considerably bigger – the same size as many CDJs’ jogwheels (5″ / 12cm).

The wheels are also touch-sensitive and weight sensitive, meaning pushing harder on them has a different effect to touching them softly, a feature also available on the much more expensive Traktor Kontrol S4.

4-deck mixing on the cheap

The recently reviewed Reloop Contour and the new Vestax VCI-100 Mk II both have a built-in 4-deck capability, but the supplied software with both of these – Traktor LE – doesn’t. For that, you’ll have to shell out extra for the Pro version. However, the DJ 4Set – similar to the Denon DN-MC6000 (of which we’re expecting a review model very shortly), comes with Virtual DJ 7, that while still a cut-down version (no full-screen video recording, no broadcasting your mixes, no recording your mixes), is nonetheless 4-deck capable without you paying any extra.

At US$249, this is easily the cheapest 4-deck DJ hardware/software combination out there.

The controller is pretty simple out of the box – of course, everything is mappable as with nearly all controllers, so you can set it up how you wish – but it does have some nice additions.

One feature that stood out to us is the 2-colour LEDs, that can be lit green or red. We’ve not had a chance to play with one of these units yet so we don’t know if these LEDs show two states of the same control, or are used to help you differentiate between the decks you’re playing on (eg red for decks 1/3 and green for decks 2/4) but either way, they’re neat.

Apart from that everything else is exactly as you’d expect for an entry-level controller. There’s a microphone input, which is a nice addition, and there are rudimentary effects controls so you can add some icing to your mixes, but there’s nothing you wouldn’t expect, and nothing missing that you would.

Like the Mixtrack and Mixtrack Pro did for Numark in 2010, the DJ 4Set has upped the game for Hercules at this end of the market, and looks set to do well for them on launch in April 2011.

• See spec and press release at the Hercules website.

What do you think of the Hercules? Are you at CES? If you’ve had a chance to have a play on it, please let us know. 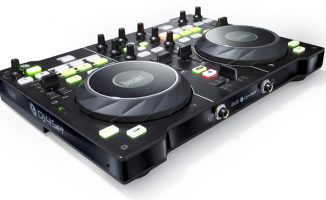 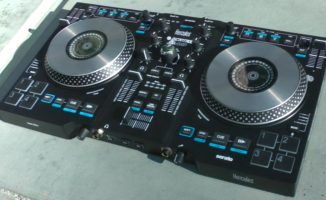 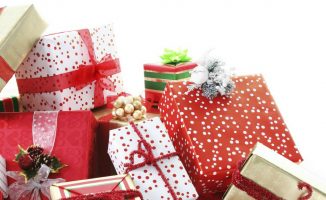