Mixvibes, the DJ software and hardware company, has steadily established a good reputation for itself, and won’t do its profile any harm with this latest release.

Just in time for the NAMM show, the company has announced a DJ controller, U-Mix Control Pro, complete with fully integrated Mixvibes Cross 1.5 DJ software, providing a complete turnkey laptop DJ system. Mixvibes has also launched an iPad remote control app, U-Mix Remote, to allow its software to be manipulated from an iPad via WiFi. Let’s look a little closer:

This is, at first appearance, an identikit DJ controller. Think DJ Tech, Gemini etc. and you get the idea. It has a reasonably standard function set – build-in sound card, internal mixer, 2 touch-sensitive jogwheels, microphone input, and what look like 6 cue settings per channel.

Interestingly it also has a gain control per channel, and it looks like the EQs have kills on them (they have on/off LEDs next to them indicating this as a likelihood).

In its recent upgrade to 1.5, Mixvibes Cross gained effects, hi-res Midi compatibility and an output limiter to ensure you don’t accidentally drive the volume to distortion. It has good iTunes integration, and can hold its own with many of the features of the top packages – as long as you only want 2 decks.

We particularly like the large amount of room given over to the music library.The bonus here is that – like the Serato ITCH controllers, the Torq Xponent, the Vestax Spin, the Kontrol S4 and the new Pioneer DDJ-T1 controller – when you buy this hardware, you get a full version of the software.

That means not having to pay for an extra upgrade should you actually want to use your kit to its full potential, and it also means easy set-up – no worrying about sound card settings or Midi mappings to get going.

Like the Virtual DJ iPod app that we covered previously, this is a remote app to control the software from an iPad.

Visually it looks just like the U-Mix hardware, and communicates via WiFi with your laptop in order to provide control over the software when away from your PC.

Whether doing a warm-up set from the bar, casually planning a DJ set from your couch, or letting your club guests have a play from the dancefloor, the iPad remote lets you take your DJing out of the DJ booth.

Remember, though, it requires you to have the software running, so unlike the djay for iPad app that we also reviewed recently, it isn’t a standalone solution.

There is life outside of Traktor, and smaller manufacturers and software developers have some interesting alternatives – this is a good example, as the combination of hardware, software and iPad remote is unique.

The U-Mix Pro hardware looks pretty ordinary to us, but the software has come on in leaps and bounds recently.

Taken as a whole, and presuming the price is right, this looks a decent DJ system for the home or semi-pro/mobile digital jock who wants something portable, easy to set up and use and who don’t need 4 decks.

The iPad remote app is more cutting edge, and while it’s hard to think of a must-have use for a remote application for DJ software (after all, DJing is about performance, about standing in front of people and doing a job, not skulking at the bar with your iPad!), it’s cool just for the technology that makes it happen.

Maybe I’m lacking in imagination too – US art duo AndrewAndrew have built a whole DJ performance that involves them DJing using iPads from anywhere but the DJ box!

There’s no information on price yet, but the company will be exhibiting the products at the NAMM show this week. 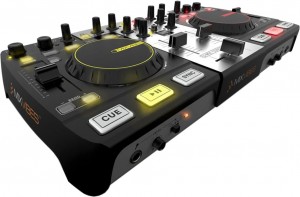 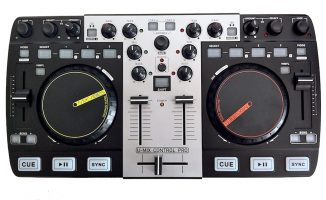