The Reloop Jockey 3 Master Edition, or “Mission III”, is a high-end semi-pro/pro Midi controller and standalone DJ mixer, which appears not to have skimped on either features or build quality in its quest to carve a space for Reloop at this end of the market.

High build quality
It’s an attractive DJ controller, in slim but substantial all-metal construction with a 2mm thick top-plate, and featuring 2 redesigned, lower-profile jogwheels. The jogwheels, like the Vestax VCI-300, have adjustable drag controls so you can make them as tight or as loose suits you, and have 4 modes – vinyl, CDJ, FX modulation and library search.

It is unclear whether the buttons on the unit are different to those on Reloop’s existing controllers, although Reloop suggests they’ve seen an upgrade, describing them as “rubber solid backlit buttons”. The company also highlights nut-inserted knobs and classic metal dip switches as notable design upgrades.

We have no confirmed dimensions, although the unit definitely looks smaller than the just-announced Pioneer DDJ-T1, Pioneer DDJ-S1, and Numark NS6 – it’s maybe more Traktor Kontrol S4 size. That would make it backpack-portable.

4-deck control and 2 external inputs
It is designed to offer 4-deck control over Traktor Pro or Virtual DJ 7, but can be Midi-mapped to other software. However, it appears that – like the Reloop Contour – the unit comes only with Traktor LE, which is 2 deck, so if you want 4-deck control, you’ll probably have to upgrade the supplied software.

The unit boasts standalone mixer functionality for plugging in 2 inputs like CDs or turntables, putting it in the same category as the Denon DN-MC6000 and the aforementioned Numark NS6. However, unlike these (and most of the other high-end 4-deck controllers), it only has 2 physical channels, which are switchable between the 4 inputs to offer control over all of them.

The audio is described as being of the highest quality, featuring BurrBrown analogue-to-digital and digital-to-analogue converters and a resolution of 24-but/96kHz. There are balanced and unbalanced outputs, although the balanced outs are 1/4″ jacks,not XLRs.

Other notable features include a separate booth output (absent from all of the controllers mentioned so far except the Denon DN-MC6000), an LED dimmer to adjust the overall brightness of the unit, and a shift lock so you could effectively have 2 different Midi mappings and switch between them – great if you want to use it to control 2 different programs.

There is also a rather unusual cue mix fader, and a master thru for a third external source, such as another mixer (good for band use or more complicated set-ups), or – more likely – a back-up music source in case of a computer crash.

This looks like a promising controller. It’s a nice size, it’s optimised for Traktor (cue point and FX functions are covered well in hardware) and if the build quality is up to the claimed standard, it looks like it could turn out to be a bit of a workhorse.

While some may miss 4 physical channels on a 4-deck digital mixer, arguably 2 is enough, especially with a good Midi mapping to use decks 3 and 4 as sample decks. It certainly makes for a more portable unit.

One curious thing about some of the controllers launched so far this year is that they appear too big to easily carry around, but don’t have some of the functions necessary to be contenders for installation gear in smaller DJ booths, such as a booth out. Conversely, this unit is portable, yet has a booth out!

Will it succeed?
Whether it lives up to the hype, at what price point it comes in (no word on pricing as of now), and how quickly and widely it becomes available will all determine its success.

Reloop has just signed a USA distributor so expect to see more of their gear stateside. But having said that, we’re still waiting for the release of the Mixage, announced last October.

We’ve requested a review sample, so as soon as we can, we’ll bring you the full scoop and a video talk-through.

Does this appeal to you? Are you in the States, looking forward to getting a first-hand look at some of the Reloop gear we’ve been featuring? Or are you underwhelmed by this release? Let us know your thoughts in the comments. 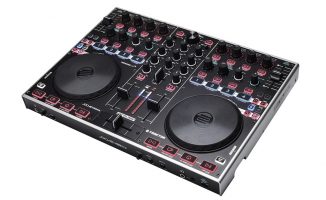