Remember our Is This DJ Helmet Even Dafter Than Daft Punk? article a couple of weeks back, featuring a viral video of a digital DJ wearing a hacked Mac Plus as a helmet, complete with computer generated visuals?

We tracked down DJ Kid Chameleon who featured in the video, and talked about that helmet, club visuals, the advantages of digital DJing, and why getting all your mates involved really helps when promoting your own club nights…

How old are you, and how long have you been DJing?
I’m 22, and I’ve been DJing for a year and a half now.

Where are you?
Simi Valley, California.

So how did the helmet come about?
My friend Terrence had to make some sort of interactive sculpture in class. He found a Mac Plus on the internet and realised an iPad could replace the screen perfectly, so we decided to do it. Once he’d done that, we put two and two together and decided we’d try to use it as part of a DJ performance. Now we’re adding components to it to make it easier to wear, and we’re going to make a video with it every time.

Of course we all saw the video of you wearing it. How did that video happen?
My friend who helped me to select the helmet submitted it to the Mac and tech blogs – Gizmodo, Engadget, techy Apple blogs and so on – and they picked up on it from there. So it wasn’t completely by accident!

And do you get recognised now?
It’s funny, because while I am getting recognised from that video, my friend in the background gets recognised more than me – remember, I’m wearing a helmet for most of it! Reaction to it was huge, though – much bigger than we expected.

Why do you think reaction to it was so big?
Well we were lucky that it was approaching the 25th anniversary of the computer. We didn’t know that!

Let’s rewind a bit. Tell me how you got into DJing on the first place.
I was already making music and producing. But I wanted to DJ too, and so just to try it out really, I got a little Midi controller – the Hercules MP3 e2 – and gave it a go. House parties, that kind of thing. Before that, I was actually experimenting with DJing with Ableton Live, just cutting tracks up – nothing professional.

Do you still DJ with the Hercules? I noticed that’s what you were using in the video…
No, I use the American Audio VMS4 now, which is much better suited to what I want to do, because having lots of Midi controls is very important to me. I love Midi mapping! I use Virtual DJ with it.

Have you seen the new remote control app for Virtual DJ, that lets you control the application by WiFi using an iPhone?
Yes, I was considering using that. I could DJ on a friend’s face!

We made some predictions at the beginning of 2011 on Digital DJ Tips, and one of them was that DJs would get more directly involved in the visual aspects of their performances. You seem quite serious about the visual aspect of your DJing…
That’s true. I’ve always been interested in offering a visual experience as well as a musical one. We’re working hard on this side of it, it’s a way of doing something different. I’m into visual design too, in a big way.

So presumably you have quite a lot of gear as well as your DJ controller and laptop?
Yes, we bring three computers, one of which runs visuals. There’s an iMac, Midi keyboard, Wii remotes operating stuff wirelessly, then the DJ gear too – Mbox, headphones, MacBook Pro, VMS4…

You say “we” – how many of you are involved in putting your DJ events on?
There’s a collective of eight to ten of us. Each of our nights typically has three or four DJs, and DJs from other nights help us to promote our events.

How do you promote your event?
The usual – Facebook invites, posts on local websites. We also get our gigs in the local newspapers, try and advertise them locally with flyers and so on.

How big is the venue you use?
It holds 400 people. We fill it every time!

Do you find it is still worthwhile doing offline advertising – newspapers, flyers and so on?
Yes, it is. The internet tends to get people interested in you, your night, what you’re doing, but traditional advertising is what gets people in the local area involved.

You’re obviously a digital DJ. Have you ever tried to DJ with vinyl or CDs?
I used to have some old school vinyl that I tried mixing on. I liked it, but I just didn’t have the time to practise, what with my music producing and all my visual work.

So the benefits of digital for you is that you can do what you want to quicker?
That, and ease of access to the music. It’s all just there, in folders – no flicking through records. It’s easier to search with the keyboard!

It’s funny you should say that, because one of the things vinyl DJs say is that they can’t get their heads around their music when it’s just MP3s – they’re used to the physical records, the pictures, the feel of them…
Well that’s not me at all! Probably because I’ve always used digital, I’m more comfortable with my music in folders and playlists than in record boxes. For me, with digital, I just hook it up, do what I want, no need to worry about it – it makes it easier for me to focus on the mixing, rather than the kit or finding the next tune.

What advice would you offer any reader who may want to be playing their music regularly in front of 400 people but doesn’t know where to start?
I’d say go out to the clubs you want to play in, see them, hear the DJs, bring a demo. You may have to go to a few places, but someone will eventually like you and want to book you. Whether it’s in a small or big club, it doesn’t matter – what’s important is that you bring people along, and that you do well. As long as you do well, people will start to recognise that.

So where does your DJing you go from here?
Well, I’m working with other artists doing the same thing, finding gigs through collaborating with other artists who are into the visual side of it too, y’know, just getting on. I want to see how far I can go with this. There’s a plan behind it all…

Do you think it’s a good idea to take over the visual aspects of your DJ show as well as just the music? How important do you think it is to know how to make music as well as just playing it for modern DJs? And are gimmicks a good thing to help you get recognised? Let us know your thoughts and and similar experiences in the comments… 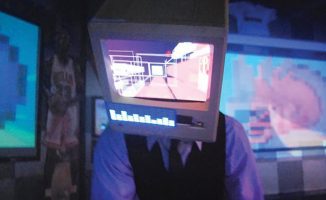 Is This DJ Helmet Even Dafter Than Daft Punk? 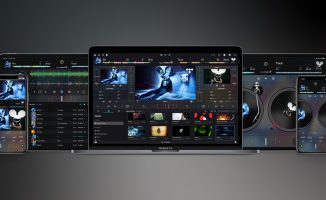 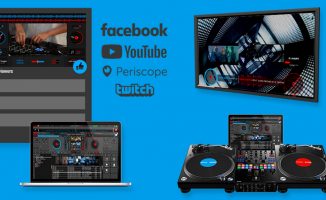