Reader Robert Moff writes: “How many beats until the key changes? And please can you do a bpm / key chart to help me understand key change, because I’m not sure.”

Hi Rob. Keys can be really confusing at first, but once you understand the concept, it isn’t that difficult. Also, luckily there are tools around today in modern DJing that can help you to use keys and key changes to play great-sounding DJ sets.

Most pieces of music are in just one musical key
The key of a piece of music usually doesn’t change: apart from cheesy pop records, generally a piece of music remains in the same key throughout. If you want to hear an obvious example of a key change, listen (if you can stand it) to Whitney Houston’s “I Will Always Love You”. Towards the end, she goes “up” a key for the chorus. It’s very obvious when it happens.

The best way to understand what “key” means is to imagine a piano. Think of the simplest melody, like the four notes they play in an airport over the PA before they say something, or in an elevator when it arrives at a floor.

Now, you can play that melody from memory starting from anywhere on the piano keyboard. You pick your starting note and then play the next two or three notes depending on where you started. You could play the same tune a bit higher or lower by playing the melody from a different starting note. What you’re actually doing is playing it in a different “key”.

Understanding keys, scales and octaves
You now know what a key is. But a piano has 88 possible notes, and there are not 88 different keys. How is this?

This “scale” represents the notes your version of the airport tune or indeed a whole song in that particular key would use. When someone says a tune is “in the key of C”, what they mean is that its main or starting note is C, and the scale it uses is the notes that you’d play a tune on if that’s where you started.

There are actually 7 instances of the note “C” on a piano keyboard, ranging from a really deep one to a very high one. By the way, there are also two “scales” from any given starting note – called major and minor. The first sounds jolly and twee, the second more menacing and even a bit “sad”. Strangely maybe for a happy medium, most dance music uses minor scales. That’s why we say a key is “minor”. So from any starting note, there are two keys – if our starting note was C, the two possible keys are “C major” (or just “C”) and “C minor”.

How BPM and key are related
The reason BPM is related to it is that if you speed up a track you make the starting note higher – or to put it another way, you change its key. If a piece of music is in the key of C, and you alter your pitch (by 6%, as it happens) by speeding it up, it moves a whole key up the piano keyboard and is now in the next key up the scale (C#).

That’s why DJ software has “key lock” functionality – it holds the key the same while the BPM can be altered (and on some you can also alter the key without changing the speed).

Camelot notation
Once you get your head around keys, the easiest way to mix with them is to use Camelot notation, which is what Mixed in Key uses. That applies simple rules to keys so you can easily review all your tunes and see which ones will mix well into the current one. 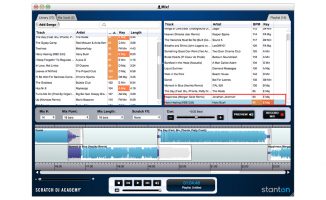