djay for iPhone & iPod Touch brings this acclaimed Mac and iPad DJ platform to the iPhone and iPod Touch for the first time. Here, Digital DJ Tips presents the very first full hands-on review of this potentially game-changing software. Does it represents a true leap forwards in ultra-portable DJing, or is it one shrink job too far?

As with all apps, buying via iTunes is a cinch. And upon opening the app for the first time, our first impression of this product can be summed up in one word: slick. Algoriddim – the company behind the djay range of software – has always released beautiful-looking products with the emphasis on ease of use, and djay for iPhone carries on the tradition.

The animation, the graphics, the integration with iTunes, the way you get two decks in horizontal mode and one in vertical mode, the auto deck switching on-screen when you pull the crossfader across, the quick search of iTunes… all of these functions immediately alert you to how this product has been designed to be simple and fun to use.

Your first 90 seconds with it will certainly elicit a “wow!” reaction: It’s immediately clear that this is going to feel great in use. But the question is, does it hold up as a genuine DJ platform?

You load tracks using a drop-down that accesses the iTunes library that’s already on your iPhone – no need to separately upload tunes for djay, as was the case with earlier iPhone DJ/music apps. (This takes advantage of recent improvements in the operating system.) You can sort by playlist, artist, song, album or genre, and there’s also a fast search box. Analysed songs have their BPMs displayed while navigating the catalogue.

There’s autocue for the start of your songs (you can also manually set the cue point), and once you load a tune, just as with the other versions of the software, the virtual deck, complete with cover art, begins to spin in time, with the tonearm showing where you are on the record.

You can scratch just by putting your finger on the record and wiggling it, and when you do, the waveform at the top of the screen – which shows the full track usually – zooms smoothly right in so you can see the exact part of the track you’re scratching. Really neat. You can even perform perfectly good sounding spinbacks on the device!

Next to the waveforms (which have a red line showing you where you are in the track) are L/R VU meters for each deck, plus song information and time counters.

Turning the device vertically focuses on the active deck only, with the numbers “1” and “2” appearing either side of the crossfader – tapping them then switches decks. Also, moving the crossfader to a deck automatically switches the visual focus to that deck.

Each side has a button that flips the deck out of the way, replacing it with one of three easily-selectable windows of controls, which are for BPM, EQ and looping. You can manually adjust the BPM (there’s a big Technics-style pitch fader, naturally) or just hit the ubiquitous sync button. There are nudges too for getting things in phase. If the device is horizontal, these controls take the place of the deck that isn’t active.

The EQ screen gives you faders for lo, mid and hi plus gain for each side, and the looping section has a block of buttons for looping lengths from 1/32nd of a beat to multiple bars, which are already beatmatched for you.

What’s more, you can slide your finger around the grid, so for instance, you could start a one-beat loop then slide to two beats, down to the fraction loops, to give a pretty unique-to-touchscreen effect. There is also a separate loop screen that lets you halve or double the current loop length. A loop shows as a translucent block on the track’s waveform. “Bounce loop” is like a beat masher – a nice touch.

Just as with the iPad version, there is no true stereo monitoring, but Algoriddim has got around this by offering a split output, so with the correct DJ splitter cable, you can plug your device into both an external sound system and a pair of headphones – the music will come out of all channels in both, but of course it will be in mono.

If you don’t want to mix manually, there’s an automix setting which lets you choose a source playlist, decide if you want the songs to be played in order or shuffled, and pick a transition type. If you choose automix, you can also use AirPlay to stream the music to Apple TV, your AirPort Express station, or any AirPort dock – of course, real-time mixing is out of the equation if you do as there’s a delay involved once you “go wireless”.

Finally, there’s a record function, so incredibly, you could actually perform and record a full DJ mix with nothing more than this device. Recordings can be retrieved in iTunes on your laptop PC.

It feels almost churlish to start listing wanna-haves on DJ software for a phone! However, a couple more cues and some rudimentary effects (maybe even just a filter) would be good, as would the ability to sort by BPM when searching for music. Extra columns when in horizontal mode, like grouping, key or comments, would also be useful.

I think djay is the first app that truly nails DJing on the iPhone and iPod Touch. It was always likely to, due to the well-received Mac and iPad software from the same company, but for some reason on a phone, it is a real eye-opener. Maybe it’s because, for the first time, you literally need nothing else at all with you to DJ. Nothing!

Now, you can be sat on a bus, or in an airport, and on popping a pair of headphones on you can review music, work out mixes, record the results… we’ve come from 40kg of kit that takes up a room and costs thousands, to do exactly the same thing on the 140g phone in your pocket, in less than 10 years.

djay for iPhone is like iTunes on steroids for the digital DJ generation, and it may just change the way you listen to your music on your iPhone for good.

After all, you can open this instead of iTunes, select an album, artist or playlist, and hit “play” just like you would with iTunes, but the difference is you can dive in any time you want and take over the mix, effectively changing your role from music consumer to DJ and back again whenever you want.

I’d be as bold to say that apps like this may just be the future of music consumption on the go. It’s all down to the ease of use, and the fun factor: It looks good, it works well, and what’s more it’s perfectly possible with one small adaptor cable to plug it into a proper stereo and rock a party on it too. Really, if we rewind just two or three years, this would be utterly unbelievable. In 2011, it’s merely amazing.

Are you tempted by this app? Would you consider DJing a party on your phone? Can you see this replacing iTunes as your music player of choice when out and about? And do you think soon, “everyone will be a DJ” thanks to apps like this? Let us know your thoughts in the comments. 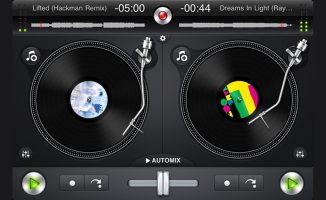 Get djay for iPhone & iPod Touch Today For Under $1!