Well, the load on Native Instruments’ servers was apparently so huge on launch day last Wednesday that they temporarily went down. However, they handled it in the most part, and now, all over the world, thousands of DJs have their shiny new Traktor 2 products – and especially for controller DJs, Traktor Pro 2.

Many will be Kontrol S4 owners who now finally have the hardware/software combination that Native Instruments always intended for them. Others will be DJs using any of the other popular controllers that run best with Traktor.

One thing we’re hearing from many DJs is that they just haven’t had time to put Traktor Pro 2 through its paces yet! They downloaded and installed it, and then life managed to get in the way, and the’ve had no time to really get to grips with all the new features. That’s certainly the case with us, as we’ve been flat-out preparing for our in-depth coverage of the Musikmesse music fair in Frankfurt, Germany this week. We got our copy loaded, booted it up, and… well, that’s sadly about it.

Pretty incisive, huh? But we haven’t had a chance to play with the sample decks, or the new effects, or the configuration options, or the improved beatmatching algorithms… yet. Rest assured a full in-depth review on what’s new and what we think of it is not far away.

But in the meantime, we thought we’d ask: What are your first impressions of the software? Is it living up to your expectations so far? Is it all you hoped? Is it more than you hoped? Or are there still things you wish they’d implement that haven’t come with this new version?

Please share your thoughts as we all get to know this new release together… and happy mixing with your new software!

If you’re a new owner, let us know your first thoughts on any of the new Traktor products in the comments below. 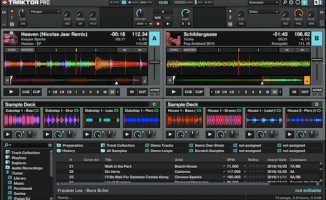 Review: Traktor Pro 2 - Is It Evolution, Or Revolution?