With CES on now and NAMM next week, this is traditionally a busy time of year for new DJ and music gear. While there’s lots of stuff we kind of know is coming, there’s also lots of stuff that’s already out of the bag or otherwise rumoured to be imminent. Or being teased. Or just plain accidentally out there.

So don’t fall behind now! Use our quick guide to stay up to date. With new gear from Native Instruments, Rane, Gemini, Reloop, Numark, DJ-Tech and several others, here’s our round-up of what’s on the radar at the moment.

With Native launching a new @traktor Twitter account today, and this photo being teased right away on it, it’s obviously a bit of a big deal for the company, whose fans have been eagerly awaiting what they’re going to do next since the well-received S4 and then the S2 last year. We have absolutely no further details at all about this, so we print the picture and leave it for you to get your thinking caps on…

Do say: Wow, this is going to blow apart the pad/DJ controller market!
Don’t say: Is that an Allen & Heath Xone K2 with some buttons attached?

A two-channel TTM-68? Apparently so, it the gossip-mongers who posted hastily removed snaps just before Christmas are to be believed. Natively Serato Scratch enabled, this would be a cheaper, more portable version of the company’s well thought-of larger mixer. Whether or not the picture a reader emailed us has anything at all to do with it we don’t know, but hey, we’re going to print it anyway and let you decide…

Do say: I’ve been longing for a two-channel TTM-68! Great timing!
Don’t say: Does it work with Traktor Scratch?

A curious one this. It’s definitely real (was shown at CES and is already on the DJDeals site, that renowned home of gear-that-looks-like-it’s-on-sale-but-in-fact-isn’t), and it seems to be a consumer-focused DJ controller with the form factor of slightly more expensive models. However, it’s apparently priced around the US$200 mark, so it’s going to have to be good to complete with existing controllers in that price band.

Do say: Another great choice for the part-time or first-time DJ!
Don’t say: It’s not as good as Mixtrack Pro.

This is the same housing as last year’s FirstMix, with blue instead of red trimmings, and a couple of extra knobs to control levels for the spankin’ new built-in sound interface. Expect to see the original units going for a song in stores near you shortly.

Do say: They’ve fixed the issues I had with last year’s little marvel. Great!
Don’t say: Where are the pitch controls?

A swipe at the S4? Possibly. We guessed as much in our 2012 predictions. Until we see the spec and get a demo we can’t be sure, but Reloop’s new Terminal Mix is certainly a four-deck Midi controller. It apparently comes with Serato Intro and Virtual DJ (a four-deck version), although you’d expect it to also have a Traktor Pro 2 mapping as well.

Do say: Great to see some serious high-end competition at last
Don’t say: Looks suspiciously like the VCI-400 to me

Like a cross between some rainforest-felling exotic colonial furniture and a spacecraft dashboard, the Smithson-Martin KS-1974 is nothing if not ostentatious. Basically mimicking the interface of their huge touchscreen (great to look at, hard to use) from last year, this unit gives you a touch surface and is meant to be used with a laptop. It is also mind-blowingly expensive.

Do say: The pinnacle of modern touchscreen DJing.
Don’t say: Doesn’t the iPad already come with a stand nowadays?

A new DJ program (sorry, “app”) for iOS devices and designed to work with the same company’s new portable mixer (see below), this software on examining the tech spec seems to have a strong effects section (including X-Y pad), a powerful sampler, and the ability to beatmatch to external sources. It could be an interest new iOS DJ software addition.

Do say: Nice! A new hardware/software DJ solution for iPad is worth shouting about
Don’t say: Why would I want to scratch on an iPad?

A diminutive mixer designed especially for use with iOS or other portable devices. It has two iOS inputs (including a dual mono model for two-deck output from one iOS device), volume and EQ, plus a microphone or external instrument input. Powered by battery packs, and comes with a host of music making and DJ apps.

Do say: Why would we want to use full-size mixer with iPads? This is a great idea!
Don’t say: My fingers are too clumsy for mixing on a matchbox.

The picture is a mock-up courtesy of Future Music, who broke this rumour. Basically it’s a record deck dragged kicking and screaming into the 21st century, with all manner of Midi and digital goodness built into it. Oh, and apparently (assuming this decidedly flaky rumour turns out to be true), it can play records too.

Do say: Great! Dicers built in to a record deck!
Don’t say: I wish they’d not stopped making Technics

Another obvious Traktor S4 sideswipe, this one has big sample/trigger buttons (check!), seemingly pro build quality (check!) and – wait there a second – is that real XLRs I spot? A booth output? Analogue ins? Blimey, it looks like DJ-Tech really are trying to bring some pro quality to their product range. We’re actually quite interested to see this one.

Do say: A Traktor S4 clone with booth output and proper XLRs? Interesting…
Don’t say: Is DJ-Tech anything to do with DJ TechTools?

So there will be lots, lots more new gear next week, but we thought we’d start to get you up to speed now so you don’t make a fool of yourself by not knowing about any of this stuff when you’re talking to your cool DJ mates at the weekend. 😉 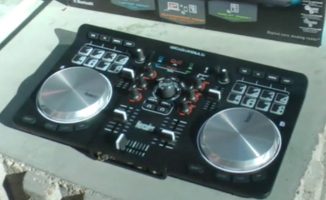 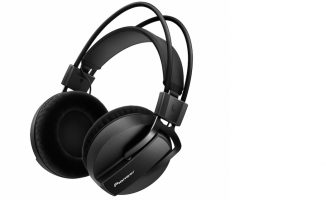 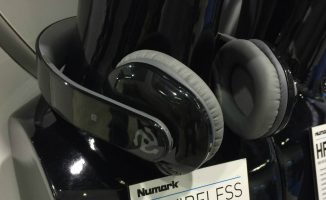