Serato’s flagship ITCH controller software now includes hardware control of sample decks with the option of full video support via a plugin, according to two separate announcements by the company this week. The software’s sample decks are in addition to up to four decks of normal playback (unlike Traktor’s two decks plus samples) – and by adopting full video support (like Virtual DJ), it has taken a big distinguishing feature from that software and made it its own too.

So, being able to play back, scratch and mix video files, and use sample decks from ITCH hardware, is obviously good news for current Serato ITCH users, albeit that the former comes with a US$149 price tag as a plugin. But with ITCH’s feature set getting richer all the time, it’s a good point to ask if Serato ITCH – an easy-to-use but previously quite limited software option – is now in a position to challenge the features of the big boys, and particularly, of Traktor.

Well, on the face of it, yes. What’s revealing is that Serato has reengineered the software as of version 2 so that plugins can be written for it (the sample decks and video features being two examples of this). In theory, more plugins will add to its new big-boy status: How about The Bridge coming across from Serato Scratch, so that you can integrate Ableton Live right there into your workflow too? You can bet it’s not far behind.

On the minus side, its effects are still behind Traktor, and there’s the great mapping divide too. Hardcore controllerists will never take Serato to their hearts because it doesn’t allow them to lift the bonnet and tweak away – it’s a “finished solution”. This, along with the tight hardware/software integration meaning you must buy Serato approved hardware for the software to even work at all, means that for modders, hackers and button pushers, Traktor is still king of the castle.

But for those DJs who trust Serato to add the features, get them working reliably, then make them available, ITCH now has a feature set to rival the best of the best. If you are the type of DJ who wants someone else to sort out the tech while you sort out the music, its appeal is now greater than ever.

The times they are a-changin’…

Of course with Traktor’s new version just around the corner, things are likely to shift again. I predict the button-pushers-vs-tune-spinners gap will widen a bit, and with it the debate as to what actually constitutes DJing in the digital age will continue to bubble happily on.

Meanwhile, we’re looking forward to getting our sleeves rolled up and experimenting with the new ITCH on the various Serato controllers we have. We’ll report back as soon as we’ve done so.

Are you excited to finally see video support in ITCH? Now that you can control ITCH’s sample decks from a DJ controller, do you think it offers a viable alternative to Traktor? Please share your thoughts in the comments. 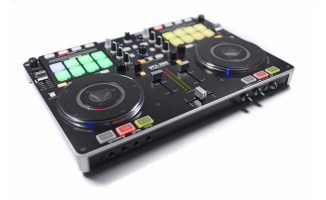