I’ve noticed many DJs on the Digital DJ Tips forum and on similar forums asking about name drops. How to make them, where to get them made, when to use them, even debating on whether DJs should use them at all.

Today we’re going to explore a little history on DJ name drops, as well as discuss how you can make your own and where to get them from professionally. Finally we’ll give you some tips on when and how to use them for best effect.

How it all started

Let’s go back in time… way back into time…

Originally, name drop use mainly started on black-oriented radio stations in the 1960s as station and show IDs. Sly Stone was known for his own pre-recorded shots of his name that he would slip in as he did announcements asking “who’s the coolest?”. In the world of entertainment-based non-radio DJs, the only times you would see someone’s name mentioned was by an MC. It was a normal practice in the golden days of reggae and the early beginnings of hip-hop where the DJ was the star of the show, and the MCs merely were backup, hyping up the crowd.

You’ll see this practice still in use with much of reggae and hip-hop culture, and even a few house DJs like Bad Boy Bill have MCs like Alex Peace who do the same. Pre-recorded drops first came into the club DJ scene when club DJs were brought to the airwaves. I can recall the glory days of Chicago’s WBMX (102.7 FM) when you would hear name drops tossed in over mixes here and there, mainly so when someone tuned in at any time, they could eventually know who’s on the decks.

These same DJs and others like them would also use their drops in the clubs, even paying money to have them pressed on vinyl. As time passed and technology grew, more DJs were having name drops made and using them on mixtapes and CDs, mainly to “protect” their mixes, so unscrupulous DJs could not take their demos and pass them off as their own. But as the musical scene grew, some factions felt name drops were somewhat “juvenile” and thus did not use them. (Nowadays, I myself only use them on radio and online show mixes.)

Before laptops made their way into the booth, DJs would find ways they could use drops in their mixes. Some would buy inexpensive samplers, or use records they found that said their name. Grandmaster Flash has been known to use an old children’s record that tells a story of Flash Gordon – “The Adventures of Flash…”.

When CD players found their way into the booth, many DJs would bring a disc of their drops, and thus use the CD player as a sampler, since they mainly used vinyl for music. Now it’s more convenient with digital, as we have built-in samplers with our software choices.

Getting your own name drops and intros

There’s nothing wrong with making your own drops and intros. We have the technology and means to edit and toy with sound, thus you can use your own imagination and try to do it yourself. (Just to define things, a name drop is just a short blast of your name you might toss in anywhere, while an intro is more a small set of edits and sounds meant to be used to kick off a mix set.)

The first thing you will need for making your own drops is a decent microphone. I would not recommend some crappy little cheap thing you might use for video gaming or talking on your cell phone. Invest in a decent microphone, because you never know when you might need it for gigs. If you’re cash-strapped, see if a friend has one you can borrow.

If you’re buying a microphone of your own, you might want to invest in an inexpensive stand (I use a tabletop stand) and a pop blocker (not to be confused with a popup blocker, which is something totally different!). The pop blocker is very nice to have, as it will keep the blasts of air caused by the pronunciation of p’s and t’s. If not, then you might want to toy around with how you position yourself so those gusts will not put clicks and pops in your drops.

The other main item of importance is some kind of audio recording/editing software. Audacity is the easy choice as it’s totally free. Some with money might get their hands on titles like Sony Sound Forge or Adobe SoundBooth.

Write a script and record several takes
At this point, it’s a matter of finding the voice you want and recording him/her. It might be your own voice or a friend. That really depends on what you’re looking for. Find a room where you can get total silence, and if that’s hard then look for a day perhaps when you get the house to yourself.

Set up the microphone around five or six inches from the person you are recording, and have them try several practice-takes of your script. Coach them and show them what you’re looking for. So if you’re trying to get a girl to sound like Leona Graham, play for her several of her demos and have her practice your script until you think she’s ready to be recorded.

Record at least three takes. Even if you think the first one was perfect, record two more to be on the safe side. What sounded perfect now can end up being “ok” later. Best to have choices and variants to pick from.

What if I can’t find a decent voice?
If you can’t find anyone whom you think has a decent voice, and you don’t want to use your own, then you have other possibilities if you’re prepared to spend a little money. Perhaps you just want a specific voice that’s known in many circles. (That was my rationale when I got mine made professionally.) There are professionals all over the internet who specialize in station IDs, audio imaging, and DJ drops. They can do just the script in a raw voice recording, or even fully create you polished drops and/or intros if you want someone else doing all the work.

Below are four recommended names if you’re interested. I’ve worked with some of them, and all come well recommended by others.

You don’t have to stop with the raw drops, though. Your next step could be to turn these raw voice recordings into refined drops for greater effect (if you haven’t already had that done by your company of choice).

The simplest, easiest enhancement you can do is to simply add some reverb. Some might think to add echo or delay, but the goal with reverb is to simply give some depth and sense of space. Even many radio announcers will have the reverb turned on all the time to make their voices not sound flat. Feel free to experiment with reverb, echo, delay, and chorus. Chop the samples up and set up stutters and repeats, or lay them out so they can read well on beat. It really depends on what you want your final result to be.

Now I’m sure while you’re happy to have a voice saying your name, you want the other kinds of effects, swooshes, blasts, and other sounds you hear in some drops and intros. You can go out and buy sounds from various sources, but also explore what you have. You might hear a sound sitting alone on a tune you bought. Use it. You might have a battle record or some “DJ Tools”. Look at them. You might find something of use.

You also have the internet at your disposal. There are several sites just full of free sound files many use for purposes like Flash web design and other possibilities. Three such sites are SoundSnap, Freesound and SoundBay. Bear in mind when you use sound effects, the goal is to enhance the voice and the final result. Often times the blasts, swooshes, and other sounds are more used to grab the listener’s attention, which can be a mistake.

The burning question: When?

This part of the topic can lead to endless debate. I won’t go into any of the opinions that DJs should not use name drops, because that’s not the discussion. I will say there is a time and a place for them.

I’ve stopped using them in live club sets mainly because they do not get the crowd hyped as much as it turns off that particular crowd. Always be careful to know your crowd and thus not come off as cheesy. However, I think you should use name drops whenever you play on the radio or any online show. It just fits. Just make sure you create drops that fit the climate.

There are two things I see as “cardinal sins” when you use name drops. The first is when a DJ uses his/her drop over lyrics or the main part of a song. So you’ll hear a vocalist sing or about to start singing, and then some DJ name drop comes in ruining the flow of the tune. Not to mention so much is going on already that you couldn’t make out the drop over the mess that was created.

It’s better to use name drops on transitions when there isn’t any major melody or vocals happening. DJs in the past would line things up so the drop hits right before the point the next tune kicks in. So it becomes a lead-in for the next song. Many others now will put one in over the breakdown, as it’s a moment where it will be clearly heard. This works well in trance.

Always bear in mind your name drop is supposed to be an identification for you. First and foremost, it tells the crowd or the listener who you are. What you create and how much you use it can either make or break you in all this. You can enhance your set or ruin it. Listen to other sets, listen to the drops. Figure out what brand image (yep, we’re back to that again) you want to send. Treat your drops as something that’s important as when you select the next tune to play in a set. Make them fit in.

Do you use name drops? did you make your own or have them made professionally? Do they annoy or delight you when you hear them? Let us know your thoughts in the comments. 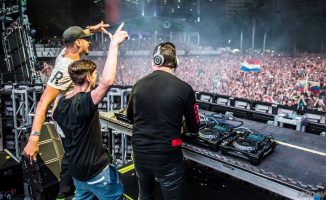