In part one of this series, we defined what video DJing is, and in part two we considered why you may wish to expand beyond audio DJing to introduce a video element to your performances.

Last week we showed the difference between old-style or “analogue” video DJing and new, or “digital” video DJing, and explained why we’re going to concentrate on digital solutions. So now we can begin by looking at some of those. This week we’ll look at software, and next week move to hardware – controllers, laptop specs, projectors and the like.

The first decision you need to make is whether to run a single piece of software to control both your audio and your video, or to go with two separate pieces of software – one for each.

Remember that we want you to be able to control this stuff yourself – at least at first. After all, not many budding VJs have the luxury of bringing their person along to do all the video stuff for them. Also recall that we are interested in showing you solutions whether you’re wanting to simply DJ with music videos, or add an independent visual element to your shows.

So the choice you make here depends to an extent upon where you fall with all of this. If you want to DJ with music videos, or just want to add “a few visuals” to an audio performance (maybe your DJ logo, for instance), you will probably err towards an all-in-one solution. It’s simpler, cheaper and you probably already familiar with if not already using one of the packages in this category.

However, if you’re thinking of getting seriously into VJing, or you’ve got more complex requirements, you’ll definitely want to consider dedicated VJ software to run alongside your DJ program of choice. Such software tends to be better featured (for instance, you can usually run multiple screens making it perfect for big venues)chosen program, even if it has absolutely no video capabilities at all (step forward, Traktor).

Alongside this though, it is likely to demand more from your laptop: You may well decide to use two laptops (one for your audio software, and one for your video software) – although today’s high-end laptops can often comfortably run both. You can link such software with your audio DJ software to keep everything in time.

Here we look briefly at three of the big systems in each arena: DJ software with video capabilities either included or as a plugin, and dedicated video software (the later can play video clips with sound, but it’s not the main focus).

It has built-in transitions and effects, including text and image effects, and also effects that are automatically triggered by the music. When used with Serato Scratch Live, you can control video using your record decks or CD players via timecode with external Midi control available too, and when used with ITCH, you control the video using the mapping for your particular ITCH controller as provided by Serato.

Virtual DJ has had video built in for a long time, and indeed was one of the first to get on this. As such it is used by DJs worldwide, and claims to work stably with a wide range of video formats. Again, there are a host of video transitions and effects, and the software can also play computer-generated images in rhythm with the music or display static images of your choice.

Like Serato’s plugin with Scratch Live and ITCH, this works with both timecode (Virtual DJ’s own) or Midi controllers, of which a couple have dedicated video capability, such as Denon’s DN-MC6000 with its switchable crossfader for video.

This is a system built from the ground up for DJ audio / video mixing. It has the ability to play music videos and video clips, alongside Flash texts, animations, logos and so on. Each audio effect is matched with a visual effect and can be synchronised with the beat. You can incorporate live camera feeds, and it outputs in HD. There are some pretty neat extras like a perspective tool (for “correcting” the angle on huge screens in venues), zoom in/out, and video preview by mouse-over-artwork. It is sold with lots of free video loops (over 8GB).

It’s available as part of a complete hardware/software solution with the company’s own VFX Control hardware, but is also sold as software only, It’s advertised as HID compatible with Pioneer’s CDJs, meaning you can control both audio and video from a club’s existing set-up.

Offers up to eight layers (or channels) of video clips, including animated text strings, Flash animations, and live cameras. It comes with a vast library of “video effects, transitions and sound-driven visual generators”. It’s got Midi learn for easy mapping to controllers, and supports OSC meaning you can even control it with your iPhone or iPad. It can receive sound or Midi from audio programs for easy syncing. It has scores of transitions, Mac Quartz compatibility, up to 60FPS – and having been developed for over a decade, is a mature and stable product

All version come with SD (standard definition) source material, but the boxed version additionally includes 2.8GB of “high quality” loops exclusive to the program, made by pro VJs and visual artists.

Handling an equally wide range of inputs as GrandVJ including Flash, Mac Quartz and text input, Resolme Avenue’s latest incarnation boasts VST plugin effects and FreeFrame GL (FFGL) effects. There is a global BPM tempo which you can link everything to to create a fully synchronised audiovisual performance, which has “beat snap” (basically like quantise) to trigger clips in sync with the beat, and you can send different layers to different screens which don’t even have to be rectangular (you can warp your video onto curved screens).

Again like the programs in this category, it has a feature set that moves way beyond video clips and simple transitions, like autostart for layers, autopilot, scale-to-fit, and even control from DMX lighting desks.

Mac-only Modul8 makes much of its easy control of effects, transitions and layers in real time, and claims to be easier to use that other VJing software which still allowing you to build up complex performances. Designed to work at extremely high resolutions through taking full advantage of whatever Mac hardware you have access to, the makers claim up to 100 images per second in HD or higher with no pixelisation.

Graphics and text and handled by modules, it supports most Quicktime codecs, and of course it can also handle multi-screens, with you deciding what parts of the composition get sent to which screens. One nice feature is the ability to record a live set at 800×600, then render it later at a higher resolution when you have the processor power available to do so.

Again, it can be controlled via Midi, and there’s a BPM module so you can connect rhythms to the software.
System: Mac
Price: €299 (download)

Next week we’re going to look at the hardware you’ll need – from laptop spec to screens.

• Thanks to Dan Booth for his valuable input in this article. A DJ for 15 years, Dan began adding visual content to his act in 2005. As well as developing his own AV act to incorporate four virtual music decks and up to three separate video outputs (all running from one laptop!), he has performed visuals for Carl Cox, The Shapeshifters, Armin Van Buuren, Paul Van Dyk and Defected Records to name but a few, to crowds in excess of 30,000 people. He’s based in Goa, India.

Do you VJ with any of the programs above? What is your set-up? We’d love to know what you use, so please share in the comments. 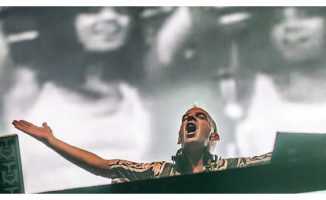 Video DJing, Part 5: What Hardware To Use 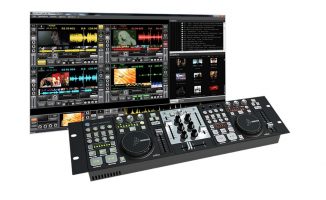 Video DJing, Part 3: Why You Should Take The Digital Route