When we reviewed the intuitive Mixed In Key Mashup, we wondered if they would be releasing an iOS equivalent or perhaps whether something similar already exists. By some strange coincidence, a new app called DJ Remixer 2 was released around the same time.

Developed by Mode2 (the same team behind the AirScratch), DJ Remixer 2 is a twin-deck version of the company’s existing universal app (Remixer) and allows you to “resequence two tracks from your music library at the same time and mix between them in sync to the beat”. Sounds pretty similar to Mashup to us! Let’s take a look…

The app features a single screen, showing a header bar with the in-app record feature, “Offset” button, master BPM, headphone cueing button and master volume control. Below this the two decks are displayed, each deck is split into several sections:

Finally, the bottom of the screen is where you find the X-Y FX pad, EQ, gain, crossfader, track start and loop controls.

At first, it all seems a little daunting, especially once you realise there’s no in-app help feature and the developer’s website is sparse on detail.

To load a track into the deck you get a small music library screen displayed with two tabs at the top. The right-hand one is labelled “Songs by BPM” and lists all those tracks previously loaded into the app, ordered by BPM.

It would have been helpful for the music library screen to feature the BPM data for non-loaded tracks and a search function; perhaps that might come in a future update.

A point to note here is that when loading a new track, the settings at the lowest part of the screen (EQ, FX, gain) aren’t reset back to their original settings.

As you load a track from your music library into the app, the BPM is calculated and the entire track is automatically split into “four beat” segments in the same way a beatgrid is calculated on other DJ software. I soon realised that this works much better with simple beat structured tracks, so no resequencing of my old funk tracks here.

Once the track is loaded, you can adjust the beatgrid by using the “Advanced Offset Edit Mode” (activated by pressing the “Offset” button at the top). When activated, an additional bar is displayed in the main section for both tracks. Using the arrow buttons you can move the segment start points by +/- one beat or 1% of the window size.

I found that on initial load, the app was good at lining up the beatgrid sections with adjustment needed once or twice. The “All” button on this bar can be changed to “High”, “Med” or “Low” to change the colours of the bar – this shows the peaks of the track at those frequencies, perhaps helping you adjust your segments more accurately. The BPM and segment adjustments are stored ready for the next time that the track is loaded.

When you press the “Play” button for the deck, the track plays through the segments with the current segment highlighted in red and the next segment marked in yellow.

While the track is playing you can tap any of the segments to highlight them as the next segment to play and the track will continue from that segment onwards. The main segment section scrolls along as the track is played. You can use the smaller colour-coded waveform above to quickly display the segments for a particular area of the track, so you could rapidly jump from middle to end and back to the beginning if you wanted to.

By pressing the loop button (positioned just above the EQ bands) you can loop the current segment only. If you want to get more creative with your segments then you’ll need to drag segments into the section below. You can drag the same segment a number of times, each segment dragged into this section is added to the end of the sequence.

Once you’ve dragged segments into this section, if you press the first segment displayed here they will play as a looped sequence. This was handy as I could drag the segments of the main breakdown to a track into this section, rearrange them, loop around them and still bounce back to the main track when I’d finished.

The only downside I could see here is that you have to drag individual segments down, it would be quicker if there was a way to select a number of segments to drag at once. Of course, all of the loops and playing between segments depends on how accurate the bpm detection is and how well the beatgrid was aligned to the beats. If either is not correct then your loops will sound clipped.

The small X-Y effects pad is a neat touch and has a lock mechanism in case you need to set the effect and do something else. The effects are limited to a low-pass filter, flanger and echo.

The three-band EQ is good; it can kill the frequencies completely and a double tap sends the slider back to the central position.

You may have noticed that for an app that involves two tracks and “DJ” in the title, there is no pitch adjust controls. The chances of hitting a perfect mix between two tracks or loops is unlikely. It had me scratching my head for a while until I realised what the crossfader was doing as I moved it:

Rather than add a pitch control to each deck, the developer has implemented an unusual crossfader. As you move the fader from one deck to the other, the master tempo (displayed at the top) changes. The app adjusts the speed of both tracks accordingly and in time to the movement of the crossfader, this is so the progress of the segments for each track will stay aligned during the mix between one track and the other.

For example, I have a fast track loaded on the deck A and a slower track on deck B with the crossfader positioned all the way over at deck A. The master audio playing out is deck A at its recognised BPM. Now, if I play (or cue using the headphone button) deck B without moving the crossfader, the track in deck B will be sped up to play at the same speed as deck A.

As I move the crossfader from A to B both tracks gradually slow down in time so eventually deck B is playing out (as master) at its correct BPM, leaving deck A is playing much slower than it would normally.

While it’s neat, if you’re not a fan of sync buttons, then the chances are that using the crossfader to adjust the pitch of both tracks at the same time is never going to win you over! It makes less of a difference if both tracks are similar BPMs, nonetheless.

The crossfader also has a “quick-cut” feature where you can chop automatically between the two decks at either one, two, four or eight-bar intervals. I wasn’t keen on this feature personally, but I expect it may suit some styles better.

DJ Remixer 2 is good fun if a little confusing at first. The tracks load quickly, the app was reliable and caused no problems on my first generation iPad, no matter what combination of loops, FX and crossfader abuse I gave it. I even recorded some noodlings with the in-app recording feature (captured in AIFF format).

The app could be improved with some help functionality, particularly around the crossfader feature which is different to most. As always, it would be helpful to see BPM data (if present) on those tracks which I haven’t yet loaded into the app on the music library screen.

It’s unfair to compare DJ Remixer 2 as an iOS app with Mashup by Mixed In Key that’s for full blown computers, but perhaps the arrival of this app may convince other companies that there is scope for development here. With ever-more powerful devices, the wait may not be too long…

Did you grab one of the promo codes we gave out for this from our forum? Have you used this app? Please let us know your thoughts in the comments. 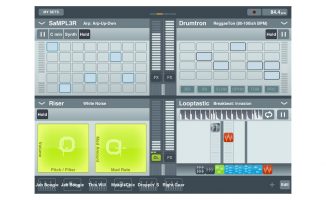