Digital DJ Tips reader Pascal from Montreal, Canada, writes: “I’m getting started as an ‘indie’ DJ, I play music like Depeche Mode, The Killers, Apopstigma Berzerk and dabble in industrial stuff at times. I have an NI Audio 2 DJ sound card and now need a controller. I’m thinking about getting the Kontrol S2 which already includes the Audio 2 with its audio chip. Also grabbing my eye are the Denon MC3000 and the Vestax VCI-300 Mk2. But the Denon doesn’t have the fancy audio sound card and the Vestax seems made for Serato which I despise being a PC man myself. I’m also very interested in using the latest audio quality formats out there i.e 24-bit 96kHz stuff. I would like to be able to mix with videos, but I’m not interested in fancy scratching and techno effects. What do you suggest?”

While it is definitely possible to buy Midi controllers without built-in sound cards still, it’s now more usual to buy them all-in-one which means whatever you do your sound card will probably not be necessary.Don’t get swayed by 16-bit/24-bit or 44.1/48kHz and 96kHz arguments. Use your ears. The controllers you mention all sound excellent, and you oughtn’t use dry specs as a reason to rule any of them in or out. For instance, the Denon is arguably the nicest sounding of the three, but is only 16-bit/44.1kHz.

Also, you seem to think that Serato is not for PC, when in fact you can use Serato software on PC or Mac, just like Traktor, which is what the Kontrol S2 is built for. However, as you want to mix video, you need to rule Traktor out, as it is strictly audio only, so that leaves the MC3000 and VCI-300 Mk II. The MC3000 and video means you’ll be using Virtual DJ, which is not a cheap program, so factor in the cost. The controller has an audio/video crossfader, and buttons to activate video windows right there on the control surface.

Meanwhile, if you use the VCI-300 Mk II, you’ll be using Serato ITCH, which although free, needs you to spend extra to get the Serato Video plugin. Once you’ve got it though, and assuming you’re only looking at relatively simple video mixing, this will work well for you. Also, the VCI-300 Mk II has no bells and whistles – it’s just a simple but highly functional DJ controller that majors on being easy to use, and would suit your style of DJing well.

Finally, keep an outside eye on the Stanton DJC-4. It’s not out yet but is imminent, has video crossfader, is for Virtual DJ, and if it sounded good, might be attractive, especially as it’s cheaper than the others.

Do you mix audio and video using these or different controller/software combinations? Are you an indie DJ who, like our reader, is not interested in controllerism-type features? What do you use or what would you recommend? Let us know in the comments. 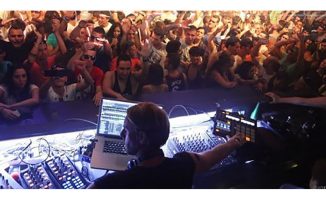