The Hercules DJConsole RMX2 (update: click for full review) – the successor to the DJConsole RMX and the first DJ controller to ship with Virtual DJ 8 – was announced in New York today.

From those, we can report that the DJConsole RMX2 boasts vastly improved jogwheels (similar to those on other recent Hercules controllers), a mini-Innofader compatible crossfader, eight performance pads, and a combi XLR/TRS microphone input.

The audio and Midi specs have been improved, with 14-bit pitch (and other faders), plus a 24-bit/96kHz audio interface.

The unit retains the overall look of the popular RMX model that it replaces, but brings it bang up to date: As well as the headline features already mentioned, there are a host of other improvements, including VU meters for each channel, a power supply in the box (it’s not clear whether it needs the power supply to operate, or can also work from USB) and a “proper” booth out.

Like the RMS before it, The DJConsole RMX2 retains an all metal construction, being made of brushed steel and aluminium. it also retains kill switches for the EQs (a rarity nowadays among DJ controllers), and has two external inputs for either line or phono-level inputs.

The performance pads are divided into two sets of four, one per side, and are velocity sensitive. They can be switched to control loops, effects, sampler and hot cues. An extra button – shift – has been added to the transport controls underneath the decks.

In total, the unit has 36 buttons (backlit), 12 pots, 5 faders and 2 encoders. It will ship with a carrying bag, ad also comes with DJUCED software alongside Virtual DJ 8 LE.

Availability, while not confirmed, looks to be this summer, and the prices being quoted in the online stores range from €250 to €322. According to today’s press release, we can expect a full announcement from Hercules in the next few days.

Are you a long-time RMX user who’s now excited that Hercules has finally got around to making a replacement? Do you think this looks like good value at under €300? Are you longing to get it just so you can try out Virtual DJ 8? Let us know your thoughts in the comments! 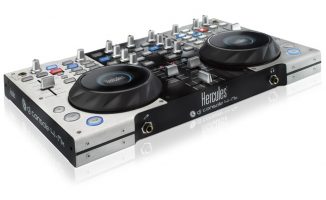