New in the app store is DJ Studio, a free loop-based remixing app. It’s powered by Loopmasters – the company behind the well-known DJ MixTools stems – which has provided the high-quality loops and samples the app comes with.

On first loading, I thought “where have I seen this before?”, and it didn’t take long to recall a similar Ableton-on-the-iPad style remixing app, Mashbox (see our previous Mashbox review). So, how does DJ Studio stack up, how good are the loops and samples, and is it easy to get good results without any particular musical skills, as the official blurb suggests? Let’s find out…

The app is basically a simple loop triggering interface. Loops are loaded into pads in the central section, which can, in turn, be switched on or off relative to the master sync setting. The empty set of loop pads in the centre was a little unnerving, so my initial impulse was to load one of the demo “sets”, which I duly did.

A “set” is a stored mapping of loops, assigned to pads in the central section. An obvious point to note here is that if you decide to change sets half-way through a performance, the audio of the currently playing set will stop (because those sounds are getting “unloaded” from the pads). Not advisable! As you might guess, you trigger a loop by pressing one of the pads. The loop playback timing will depend on the Sync setting in the top right-hand corner.

You can set the sync cycle rate on the left-hand side of the screen; these values range from two beats (for a quick cut in/out of sound) to 32 beats.

Around the edge of the central panel are a number of buttons, one above each column and one to the side of each row. These can be used for quickly switching sounds on/off, often to great effect. For example, if I press the button to the side of the first row, any pads which are currently playing (green) get marked to stop at the next cycle (red).

Any pads which are currently not playing (blank) get marked as ready to start at the next cycle (orange). This same principle works on the column level buttons as well, providing a quick and effective way of switching sounds during playback.

Rather than loading a pre-defined set, you can choose to start afresh with an empty set of pads (by selecting “New Set”). To load a specific sound into a pad, press the loop icon (bottom left) on the pad you want to alter. This will display the library of loops and mix tools.

I didn’t like the rotary controls used to control FX and EQ settings. The dials are small on the screen, and this functionality would be much better suited to a clean X-Y FX pad. If you’re using the free version of the app, you’ll notice that the column EQ is limited to a low pass filter – this can be extended to high pass and parametric with the Pro upgrade option. Something which almost escaped my notice was that in order for the EQ setting to take effect you need to tap on the “EQ” text (so it becomes green)…otherwise you’ll be twirling those rotary controls forever to no effect!

Effects are currently limited to just delay, although I would expect that this will be extended in the future – most likely via in-app purchase. You can apply the effect to each column using another rotary controller underneath the column display.

The in-app recording feature is certainly welcome, even if limited to three minutes per recording on the free version. This is a feature that was omitted from the other app we’ve mentioned that’s similar to this one, Mashbox, probably due to copyright control. With Loopmasters, the content is royalty-free, so once you’ve paid for it you can use it legally and for whatever purpose you wish.

Extending it with in-app purchases

The app can be extended, either by purchasing more loops and sounds or by purchasing extra features. I’d be surprised if anyone who buys one upgrade doesn’t buy the other. Extended features are good but will soon lose their appeal if you’re stuck with the same set of sounds. Likewise, a vast array of loops is wonderful however you’ll always be restrained with fewer pads and limited recording lengths.

DJ Studio was definitely good fun to use and the instant toggling from “on” to “off” (and vice versa) of groups sounds makes the experience more lively.

The rotary dials are a step in the wrong direction, or perhaps I’m alone in my dislike of them on flat touchscreen devices?

I noticed there’s a blank space at the bottom of the screen, between the crossfader and the tabs. I wonder what other features may find their way into the app in the future? Perhaps another row of pads?

It is definitely easy to make some pretty impressive sounds with not a massive amount of musical skill, making it a lot of fun to play with. Ultimately though (as with Mashbox), unless the variety of styles and range of content for download is significantly broadened the app will soon lose its appeal. Currently, you are limited to “progressive house” style loops and sounds, and you can’t use your own samples and loops, so you’re relying on the providers to provide fresh stems to work with.

Would you consider adding a loop-based program to your music creation arsenal? Could you see yourself plugging this into your mixer to augment your DJing? Have you tried this or a similar app? Please share your thoughts in the comments. 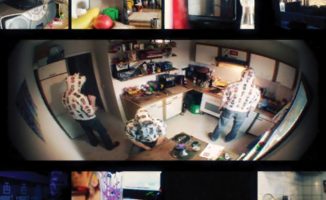