We recently showed you some easy steps to adding a tablet controller to your DJ set-up (watch out for part 2 next week). All good fun, but enough to illustrate how daunting the world of using iPads and tablets for creative Midi can sometimes be. Around the same time, we published that piece, some intriguing teaser videos for Beatsurfer, a Midi controller builder app for iPad, started appearing on YouTube. One of the first videos (above) is instantly mesmerising, a seemingly haphazard array of colourful shapes dotted around an iPad screen triggering some seriously loose and crunchy beats.

Now the app is finally available, so we thought we’d find out if creating your own Midi controllers with it is as fun as it looks, and whether Midi interface building can be so simple that even I can put it to good use…

Beatsurfing is similar to Lemur for iPad with its colourful scheme and Midi communication. However, the power of this app is in giving you the ability to craft your own Midi control interface directly on the iPad without the need to connect to a host machine during the development.

You drag shapes onto the screen to create your own custom Midi interface, defining what is triggered and how that action can affect other objects on the page.

There are a few different types of object with relatively simple actions (at first glance!):

As you drag objects from the panel on the left into the main area you can adjust their colour, rotate, or resize them, by tapping on the object and using the three icons in the centre of the left panel. Within an hour of installing the app, I was quickly setting up a bunch of Midi controls placed on the screen exactly as I wanted to play them.

I found that placing a number of Line objects in quick succession and mapping these to crisp, crunchy hi-hats or claps was an effective way to get little rolls going as I dragged my finger across. Using the Circle objects I could map out a few musical notes in the order in which I would play them. It feels very creative against randomly hitting keys on a Midi keyboard, that’s for sure.

All good so far, however, I soon realised I had barely scraped the surface. The app comes with some pre-built scenes (selections of objects with corresponding Midi mappings and behaviours), which are useful as a starting point to understand how it can be used, and more importantly how to join objects together with link behaviours.

The seven supplied scenes cover a range of functions that the objects and linked behaviours in the app can achieve, all lovingly crafted by Hermutt Lobby (further detail can be found here), with the Midi being sent to Ableton on a host machine. Since I don’t have Ableton installed (I really must get round to it one day), I decided to try using some of the many synth and drum apps I had installed on my iPad instead.

Using it with other iPad music apps

In order for you to do the same, your music apps must allow background audio and receive CoreMidi on a unique Midi channel. I decided on Molten Drum Machine (an app I’d long forgotten about until now – it’s free too!) and Animoog (purchased when it was a bargain $0.99, although it’s now $29.99).

I tweaked the settings in both apps so that the drums were on Midi channel ten and synth was on Midi channel one. Using the edit page in Beatsurfing, I could then assign my Midi notes to the objects on the page.

It’s possible to preview the sounds by tapping the Midi note in the Properties sidebar on the right. I was running these two apps and Beatsurfing happily on a New iPad, but I’m not sure how many virtual Midi apps you can have running at once before you start to get memory issues.

It didn’t take long for me to rock (or at least clunk together!) two music iOS apps at once via Beatsurfing, still without the need to connect up to a host machine or worry about a wireless network or delve too deep into Midi configuration. It couldn’t have been more simple. That is until I started looking past the simple interface I’d built and at the example scenes, where behaviours between objects are explored…

Each of the object types can be positioned using layers to create a (touchscreen representation of a) 3D Midi control interface! Objects can be “swarmed” and stacked up which is something impossible in physical hardware. The mind-blowing part is when you start considering the behaviours. There are five behaviours each available on one or more object types:

These are described in detail on the Beatsurfing site, I won’t describe them again here as it could get complicated quickly…

An added bonus is that the performances in the above video and many more made by the developers are dissected and unselfishly offered up including Ableton settings and samples are available via the Beatsurfing site. You can easily swap Beatsurfing scenes with other users from within the app via email (a forum would be better). You may choose not to use the scene exactly as someone else had it set up, but you can easily learn from their configuration and either tweak it or incorporate the same methods into your own scenes.

For a Midi novice like me, the prospect of Midi configuration with this app didn’t appeal at all. However, with Beatsurfing, I’ve discovered that it doesn’t need to be overly complicated and it is possible to connect several iOS apps together on the same device using virtual Midi.

Because Midi can be transferred via the camera connection kit or Wi-Fi you can easily connect up to control software (such as Ableton, Reason, Modul8 etc) or hardware (perhaps I should have kept my old Waldorf Blofeld synth!).

If you search for Midi in the App Store there are many piano rolls and MPC pad-style apps, most of which are a poor imitation of tried and tested hardware features. Beatsurfing is different. It leans heavily towards gliding your fingers across the iPad surface rather than tapping on the screen, giving you a more fluid, live feel to the sound. However, you can do both… this video from Polyoptics shows the Beatsurfing app controlling both an OP-1 and a MachineDrum in a simple, but subtle manner.

For using on its own, with external hardware at some point, or with Ableton Live, Beatsurfing is great fun if you want to dip your toes into Midi controller/instrument creation, and potentially a good way of adding extra beats and bleeps to your DJing, by combining it with Ableton perhaps, or just using it to control esoteric textures for dropping over your normal DJing via a third channel. You should give it a go.

Do you use iOS music making apps? Have you considered using them with a Midi controller interface, commissioning an iPad to add an extra something to your DJing? Please let us know your thoughts in the comments. 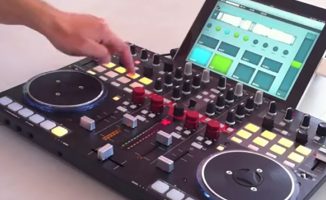 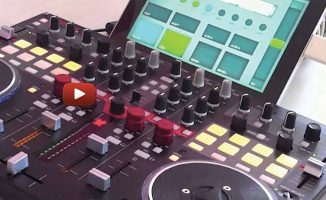 Video: Use Your iPad With Any DJ Controller 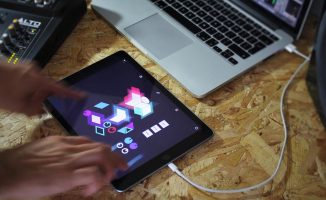