If you’re looking for a well-built DJ controller to use with Virtual DJ software, that isn’t overly large, yet manages to pack in pretty much all the features a digital DJ would want for either home or public use, you’ll be interested in today’s review item, the new Stanton DJC.4. It feels right, it looks good, and with balanced and unbalanced outputs, aux and mic inputs, and inputs for two phono or line sources, it also looks almost too good to be true for the price. Which in a way, does turn out to be the case. Time to take a closer look…

It’s similar in look and feel to a Reloop controller, and that’s a compliment. Nice and compact (Reloop doesn’t go in for physical bloat either), the DJC.4 is equally well made, and indeed I am pretty sure they come from the same far eastern manufacturing conglomerate ultimately.

It’s got a metal chassis, all the nicely rubberised knobs are bolted down rather than just soldered into place, and the jogs, replaceable crossfader, rubberised transport controls and rather small backlit buttons all feel built to last; if not best of the best, they’re definitely not rubbish either.

It’s quite sober in appearance until you plug it in, to be hit by a wall of bright lighting from all of those buttons. Unlike, say, the Novation Twitch, these are all perfectly visible, even in sunlight.

The layout is pretty traditional, yet there are a lot of features packed in here: Full looping; four hot cues per side; four sampler triggers per side; a four-knob effects area per side, with the ability to switch one of the pots to the channel faders, Novation Twitch style; filters and key change options for each active channel; push-to-kill on all EQ pots; two layers to control four decks; video/audio switching for the crossfader; and a shift layer to double up all controls in your own mappings. This is indeed a capable controller.

While it turns out that the unit itself is a rebadged OEM controller (I have seen the same physical design out there from two other brands, with slightly different feature sets), Stanton has clearly put work into fine-tuning its take on the raw design to work tightly with the software, as becomes more apparent later.

Setting up is the usual yada yada, which for the uninitiated means installing ASIO drivers if you’re a windows user (it works out-of-the-box with Mac), and installing the supplied Virtual DJ LE Software, and entering the supplied serial to get the software working. From there you can run LE, or try a 20-day trial of the full version of Virtual DJ, after which you’ll have to buy it, for a whopping US$249 (that’s with US$50 off, too).

The control is a solid performer. The jogs are pretty good; they’re responsive but not the finest resolution so if you’re a scratch DJ you’re going to want to look elsewhere, but for everyone else, they’re more than good enough. There’s the usual touch-the-metal (scratch), touch-the-plastic-edge (nudge) option.

The pitch faders are pretty good, although for really fine manual beatmatching I’ve used better. The crossfader is nice and loose, the other faders a little less so (as is the norm), and the transport controls are really assured and pleasant to use.

The generous loop, hot cue and sampler areas let you access a large proportion of Virtual DJ’s functions (though by no means all – for instance, there are many more sample slots than you can use from here), and the effects area particular is actually overkill for Virtual DJ LE, which is light on effects and for which you really don’t need all those controls.

Sound quality is pretty good, although it’s not the loudest controller I’ve ever used – may be due to the fact that it uses USB power (you can power it via mains power, but there’s no adaptor in the box), and has all those LEDs, there’s just not enough left to really push the outputs hard.

The headphones were loud enough, but if you’re DJing with it in a club, for instance, you’ll maybe find yourself pushing the gain a little if head-to-heading it with someone playing on standard CDJs. Don’t let this put you off though, as overall the sound was good: clear, full and decent quality.

There are both balanced TRS and unbalanced RCA outputs, but no XLRs (the mic is a TRS too, by the way), but you do get the choice of 1/8″ and 1/4″ headphones outputs. There’s an AUX on the back (1/8″ TRS) which is great for plugging in an iPhone, MP3 player or equivalent as a backup should emergencies strike, and you switch this in via a small switch at the top of the line fader. An equivalent switch on the other channel handles the Mic. A tiny switch round the back decides whether the external inputs are routed through software or not.

Using the external inputs with software

It’s important to understand how external inputs work. This is not a standalone mixer; it won’t work without a computer, and it won’t work how you might expect it to with the software that’s in the box.

You have two choices: Route your aux input/one external input through the unit entirely, effectively bypassing it (good for a backup as mentioned above, but not much else, as there’s no mixer control over those sources at all), or set things up so the two external decks route through software.

On paper, that’s good; if you route two decks or two CDJs through software, what that means is that in Virtual DJ, on, say, decks 3 and 4, you have your external inputs, and can use all EQs, effects and other mixing tools (no loops, obviously) just as if these were software sources. You can also use open-source DVS (digital vinyl systems) in exactly the same way – plug your control units in the back, and DJ away.

Except – the software supplied with the DJC.4, Virtual DJ LE, won’t let you do this. The box doesn’t say otherwise, but it is a bit vague. The truth is that to DJ with software and external sources, you need to spend that extra $249 on Virtual DJ Pro. If you’re buying this thinking you can plug all your existing gear in and just DJ away, you should be aware of this fact.

Great little controller for Virtual DJ users. If you already have Virtual DJ Pro and want a controller that unlocks as many features of your software as any, is well-built, and yet still remains portable, you ought to be interested in this as it’s aimed squarely at you.

If you are currently just dabbling with Virtual DJ and think it is going to be the software for you, again, consider this controller; while the upgrade price is steep, you do get free upgrades for life, including to Virtual DJ 8 that’s just around the corner. I can vouch that Virtual DJ is true it this, having not paid a penny since I originally bought the software in 2005 for any of my upgrades.

Indeed, if you use other software (there are third-party mappings for Traktor already, but Stanton tells me there’s something officially due imminently), and are looking for a small controller that won’t break the bank either as a backup or because you really aren’t turned on by the oversized models, this is more than capable, especially with the shift layer effectively doubling up all the Midi controls.

If you were thinking that for your $350 you’d get a true centrepiece to a full to a digital/analogue system, though, it’s not all good news; the two CDJ/vinyl inputs are pretty useless out of the box, apart from using one of them as a backup music source; to mix with these they need to be routed through software, and thus you need DJ software that allows you to do this, which doesn’t come with the controller as sold and will cost you extra.

Overall then: Well built, capable, nicely sized, flexible, and adaptable to pretty much all needs except use as a true standalone mixer, including open-source digital vinyl. If you’re a long-term Virtual DJ user or thinking of becoming one, that makes it a bit of a bargain. Otherwise, add in the cost of the software upgrade or the effort of getting it to work with your software of choice.

Looks like a bargain? Are you a Virtual DJ type who’s been waiting for a controller like this? Or did they miss a trick not making it true standalone having added those external inputs? Please let us know your thoughts below. 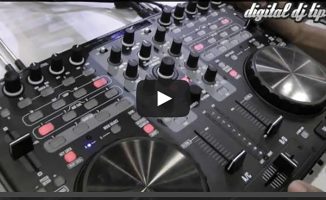 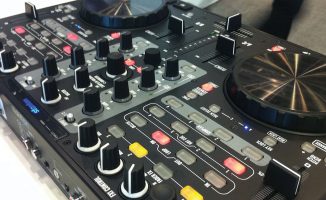