What do you think to the idea of iPad/iPhone DJing, with real stereo output for your headphones and your speakers? Or having simple in-app iTunes music purchases, with on the fly previewing? Excited? Well, if you already own djay for iPhone or djay for iPad, go hit update now, because these improvements are waiting for you in the new versions that have just hit the App Store…

As of today, Algoriddim’s djay apps both take full advantage of improvements made in iOS6 to offers full dual stereo outputs, as well the iTunes store right there in the app itself. In the case of the iPhone app, there’s keylock and some pretty major GUI improvements too…

It’s a common objection to iOS Djing that a splitter cable mono workaround is necessary to permit headphone cueing. However, that’s all changed, with multi-route audio configurable from within the app.

It is now possible to plug your iPad or iPhone into a USB speaker dock, for instance, and have master audio output in stereo through the base connector. You can then use the headphones socket for stereo headphone monitoring.

Or, with a charging accessory that also has an audio out, you can route your master output audio into an external mixer or venue PA system (while simultaneously charging your device), while monitoring through the headphones socket.

These improvements eliminate at a stroke one of the most commonly voiced objections to DJing on an iOS device, and should be widely welcomed.

But the new versions of djay go further, with the pretty major addition of a built-in iTunes Store. Complete with in-app preview, you can now search, listen to and buy new music while DJing and without leaving the app. Your purchases arrive in your library right away, ready to spin.

Keylock and a new GUI for the iPhone version

The iPhone version now has key lock (ie you can alter tempo without altering pitch), and has received a major overhaul to take advantage of iPhone 5’s wider (in landscape mode) screen. Features that had been shuffled off to secondary screens have now been reunited with the main screen, and in particular the return of the pitch faders to next to the decks makes everything feel, in Algoriddim’s words, “shockingly realistic” – and having seen it, we agree.

Time to give iOS DJing a try?

If you already own either app you’re probably already downloading as we speak, but if you’ve been holding back, now could be a good time to dip your feet it the waters of iOS DJing on your iPad or iPhone! djay for iPad is available for US$19.99 in the App Store, and djay for iPhone is US$0.99 in the App Store.

Meanwhile, we’re going to give them a play and get back tomorrow with a full review.

So, proper stereo monitoring for the iPad and iPhone at last! How important do you think this is for iPad DJing? does it make you more likely to give it a go? Have you DJed with an iPhone or iPad, and how did you find it? Please share your thoughts in the comments. 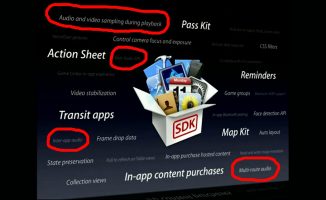 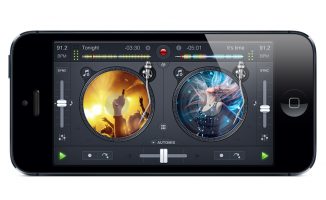