The Electrix Tweaker is a DJ Midi controller that is clearly comfortable to do things differently. Billed as a primary controller for Traktor (Traktor LE 2 is in the box), or the ultimate secondary controller for Serato Scratch Live, this bold little box is also clearly going to appeal to Ableton DJs, coming with an Ableton remote script from Livid, who co-designed it.

The Electrix brand has form, being the name behind 1990s DJ hardware such as the popular Filter Factory and Repeater units. So it’s perhaps fitting that this proud, square, metal-chassised controller is retro-looking. But the big question is: Is it going to find a niche in the crowded digital DJ market of 2013? Our Electrix Tweaker review and video will hopefully help you make your own mind up…

In the box are the controller, a set of screw-on feet, the bundled software (Traktor LE 2, the Tweaker Editor software), mappings for Traktor Pro and Serato Scratch Live, a remote script for Ableton Live, plus a USB cable. The Electrix Tweaker has some of the feel of Livid’s boutique controllers, reflecting that company’s design input. Pleasing roughened grey plastic edges raise it up from a metal chassis, and it is topped with a brushed aluminium faceplate.

The backlit pads and buttons, LED-ringed encoders, faders and knobs are all of decent quality. Four screw-in plastic feet raise the unit to the height of a standard club mixer or CDJ. If you remove the two front feet, it also angles it nicely towards you should that be your preference.

The square shape and this height differential definitely make it stand out from other controllers, and the font was chosen for the logo along with the grey colour helps to give it that retro feel. All thoughts of “grey” disappear the second you plug it in, though – those multicoloured backlit buttons and pads put on some light show! They’re plenty bright enough for daylight, even counting that the unit is USB powered.

The top panel can be thought of as divided into two halves, with the pads and buttons straddling in the middle. Each “half” has a centre-clicked pitch-style fader, three buttons, three push-to-click rotary encoders with 14 LED surrounds, and an absolute encoder with a centre click.

Meanwhile, that middle section contains eight velocity / after-touch sensitive performance pads backlit by red LEDs and a matrix of 32 multi-colour backlit buttons. Above this lot is a large, stepped and weighted push-to-click rotary (classic library selection-style control) and a ring of cursor-style buttons with a centre button too. Finally, there’s a crossfader bottom centre.

The unit is USB powered and is strictly a Midi controller (no built-in sound card), so round the back we find the USB socket as well as “old school” Midi in/outs.

One thing worth noting is that none of the controls has any labelling, and despite what the box promises, inside there were no overlay templates. Electrix has created PDFs detailing which controls do what in the supplied mappings, so initially it’s just a case of learning what they have done before deciding on your own tweaks. I gather the templates are included with current units (ours was a very early model off the production line).

Setting up involves no drivers because the unit is class compliant with Windows and Mac. However, we couldn’t get it to work with iOS via the Camera Connection Kit.

As this is a “universal” controller, you could use it with any DJ software that is Midi mappable (or indeed, you could use it to control production software – Ableton Live is the obvious candidate with the pad matrix and supplied Livid-powered mapping). However, as 75% of our readers are Traktor users and most of the rest use Serato and the other DJ products in preference to software like Ableton, for the rest of this Electrix Tweaker review we’ll focus on the Traktor mapping supplied here, with a nod to Serato.

The controls cycle through four modes, or layers, like the Allen & Heath Xone:K2 does. You can do this independently (so you can have a different mode for Deck A and Deck B). The “layers” are pitch, effects, transport and loops. What that means is that the encoders and so on on the left and right can cycle though these functions just by your pressing the “mode” button repeatedly (holding “mode” and “shift”, as an exception, takes you right to pitch control – a good move for rapid manual beatmatching tweaks).

This layered approach won’t be for everyone and will involve some discipline in remembering where you’re at, but it does allow a lot of control out of relatively few physical controls. Remember that the rotaries have LED rings, so they’ll always remember and show where they were set when you were last accessing a layer. They cover things like EQ, kill (push to kill), crossfader curve, pitch range and so on – some functions more useful than others, obviously.

The eight big pads come into their own controlling effects. They are velocity sensitive with aftertouch, and you can affect the dry/wet by pushing them harder or softer. Meanwhile, the grid buttons will be most useful to you as cues, and despite some of them being near the crossfader, they’re unlikely to get triggered accidentally.

It is perfectly possible to DJ on two decks with Traktor using just what’s provided here – assuming you’re the type of DJ who doesn’t use jogs, anyway. (There will be a lot of Kontrol X1 beatgridding DJs nodding vigorously right now.) Note that the whole thing is built around two-deck control, although I guess you could add a Kontrol F1 (or two) to add two Remix Decks to the equation too for a truly LED-intensive experience!

For DJs who use Serato Scratch Live, the supplied mapping uses the top centre controls for library functions (as with Traktor), while the pads control the SP-6 sample player. The three rotaries on each side control effects, with hot cues and looping covered by the grid. While it is possible to control the pitch of your music in an internal mode using the 70mm pitch faders, of course, there’s no internal mixing in SSL. Therefore this would be used in addition to decks of some kind and an external mixer. Also worth pointing out that now Serato DJ can be Midi mapped to a second controller, you could do that too, although no such mapping is provided.

The supplied Tweaker Editor software lets you change the properties of the controls, how the LEDs work and so on. and save your work in the form of presets. I didn’t have time to tackle this but it looks fairly straightforward, at least for the more advanced Midi programmers to whom this controller is frankly going to appeal the most.

Built like a brick, daringly original, and a pleasure to play on thanks to the LED feedback and quality of controls, the Electrix Tweaker is a pleasing little controller, and not like anything else out there (the Livid CNTRL-R is probably closest in looks and concept, but is a far more complex affair).

And while the Tweaker is a Midi programmer’s dream come true, it nonetheless has lots to offer to the plug-and-play brigade too. And while the direct influence of Livid’s Ableton controllers is clear, most of our readers will be more interested in how it works with their more traditional DJ software.

With Traktor, it can be put to use as a competent all-in-one controller (as long as jogwheels aren’t important for you) – just add an Audio 2 (for instance) as your sound card and you’re ready to go with an original and capable set-up that is worlds apart from the rake of “me-too” DJ controllers out there.

With Serato Scratch Live (and with Traktor Scratch Pro 2), alongside decks and probably an external mixer, it would make an excellent if not hugely practical secondary controller. (I say that because something like the Kontrol X1 will slip more unobtrusively into a DJ booth alongside existing gear in this user scenario, while you may struggle to find space for a larger controller like the Tweaker.) Alternatively, it would be possible to use it with Traktor Scratch Pro minus an external mixer, giving you a pretty neat little set-up – tweaker in between two Technics, for example.

It may be a little pricey considering it doesn’t contain a sound card (like the Allen & Heath K2 does), but that does mean there was more money left to make it decent quality – and there are every chance people wanting to slot one of these into their set-up would already have an audio interface somewhere in their workflow anyway.

If any of the above user scenarios appeal to you, or if you currently use say a Kontrol X1 and want something more capable alongside Traktor, or if you’ve taken one look and thought “I can map that to do what’s been in my head for so long!”, you should definitely take a look at the Tweaker.

Have you got one of these? Have you been waiting for someone to make a controller like this? Please share your thoughts in the comments. 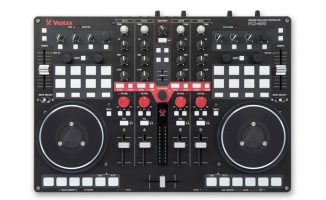