In a further sign of the massive growth of loop-based music making, Loop Loft has announced that it now offers bundled packs of its loops as point-of-sale items for retailers.

The idea is that DJs, producers and just dabblers in loop-based music making can grab some loops at the same time as buying other things, like DJ controllers, groove boxes and the like, giving them all the tools they need to start production as soon as they get home.

With gear like the Traktor Kontrol F1 being heavily pushed with its own big-name loop packs, every DJ controller under the sun seemingly now coming with built-in veolcity sensitive trigger pads, and software like Mixed In Key Mashup bringing the idea of making rough-and-ready re-edits to the masses, “everyone’s a DJ” (and a producer) is becoming truer by the day.

The packs will be available in $25, $50 and $100 denominations. Should we now start expecting our grandmothers to buy us loops for our birthdays?

Do you use loops in your DJing? Do you think they’re onto something putting loop packs on shop counters? Is it true that more people than ever are dabbling in constructing their own stuff using pre-packaged sounds and samples? Please share your thoughts in the comments. 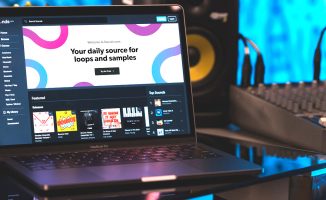