The long-touted The One DJ software is now almost ready for release. As the promo video shows, it lets you DJ the usual way with two tunes, but also allows live re-editing, because you can stack, edit and loop multiple waveforms within each “track”, on the fly. The software is therefore a mix of normal-style DJ programs, Mixmeister, Mixed In Key Mashup, Traktor’s Remix Decks and a touch of Ableton Live – oh, and Virtual DJ 8 too, which has a similar timeline-editing feature.

What all of these programs do is allow the DJ to break away to a greater or lesser extent from the playhead and prepare forthcoming musical sections that will then play automatically when the playhead reaches them.

With The One, one bonus is that you can save your creations, so unlike, say, Traktor Pro 2’s Remix Decks, it’s possible to recall your arrangements for further work later. We have been assured a private beta version of the software is just around the corner, and we’ll bring you a full review of it as soon as we can.

“Timeline DJing” in all its forms is a powerful paradigm that breaks away from the standard way of thinking about performing recorded music.

On the one hand, it definitely opens DJs up to far more creativity than simply mixing one tune into the next – but it faces accusations of turning DJs into screen-gazers as they chop and edit waveform segments as part of their sets. What do you think?

Can you see possibilities in this style of DJing? Or do you feel it’s moving too far away from the essence of what DJing should be about? Please share your thoughts in the comments. 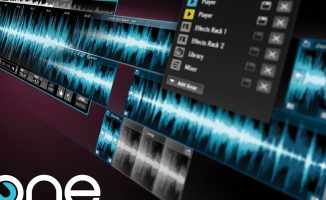 The One DJ Software Officially Announced