A number of exciting updates for iOS DJs hit the App Store over the Christmas and January period, and due to the tsunami of coverage from the NAMM Show that always happens at this time of year, there hasn’t been editorial space to cover them all.

So for our growing band of readers who use an iOS device for either their only DJ system or as a second DJ system, here’s a round-up of the most significant news from the past couple of months:

It’s been a busy few months for Algoriddim, makers of djay, the recommended software for the Numark iDJ Pro iPad DJ unit. Just before the winter break the company gave users a few seasonal gifts in the form of sample pads in djay, video support via the vjay app, and finally, stereo master and cue signals for all iOS 6 users.

The last of those items is probably the most eagerly anticipated by iDJ Pro owners. It is applied through firmware update via the djay app itself (I’m not sure the same update is applied if you only have the vjay app – probably not). Anyway, what you should see during your update is a nice little confirmation that something is occurring.

The sample functionality with djay and the iDJ Pro is a welcome addition. Not only can you trigger a bunch of stock samples via the pad display on the screen, you can choose from a library of other stock sounds and also load your own one-shot samples for use (via app file sharing when connected to a host machine). The custom djay interface for the iDJ Pro also means that you can adjust the volume of the sample playback so they don’t encroach too much in your mix.

DJ Player gets DVS and a new look

The updates to DJ Player keep on coming. In November the background got a new standard look, and in December version 5.5 gave us DVS control and the ability to load your own custom background into the app.

In order to use the DVS control for both decks in the app, you will need a USB class compliant sound card with four inputs and four outputs (ie two stereo in and two stereo out). If you want to use turntables then your choices are currently limited, but it seems that the Numark N4 controller does a good job providing these audio connections. Perhaps we’ll see more class compliant sound cards arrive throughout the year.

Another release is ready to roll that will provide Dropbox support (so you will be able to view, analyse and load tracks from your Dropbox app account), and a new mixer screen (MIXFX) where you can play with FX at the same time as blending two tracks and full music library support – not just tracks from playlists.

App developer Retronyms has worked with Akai to produce a standalone app called iMPC which brings the familiar look of beatmaking hardware to the iOS platform. So now while you’re between gigs or on the way to work, you can be crafting your next big track. The clever part of the app is that it works in conjunction with Tabletop (a virtual music making host) and also Akai hardware such as the new MPC range (Renaissance, Studio and Fly).

I used to own an MPC 1000 many years ago and sadly had to part with it, so I was extremely glad when the iMPC arrived. It doesn’t quite work exactly as my old MPC used to but there are some clever features in there – such as the ability to sample from your Music Library and the ability to route the audio through the effects and modules on Tabletop. (If you prefer your tactile controls then the MPC Fly provides a hard case around the iPad and a set of MPC pads and buttons for use over Midi.)

At first glance it may not seem important for the DJ, but if you’re into making music or beats on your iOS devices it most certainly is. The Audiobus app is simple enough, but revolutionary: It allows you to connect the output of one app to the input of another.

In the pictured example you have SoundPrism Pro, FunkBox and Sunrizer all feeding into the MultiTrack DAW app which will record the audio from those three apps into three different tracks for mix down.

The list of compatible apps is growing; only recently Korg introduced support for Audiobus in all of its apps. There are a number of effects apps (such as LiveFX) and one DJ app (Cloud DJ) that also use it. Could we expect to see DJ apps introduce Audiobus support as a means to add extended FX or samplers into the mix, rather than build them into their app?

At the end of January Apple announced that the new iPad with Retina display will be available as a 128GB version, albeit at a high cost of US$799 (WiFi) and US$929 WiFi + Cellular. This continues the Apple standard of charging US$100 per increment of storage space. However, in terms of US$ per GB of space, it is far better value than the other available sizes. It still seems incredible that Apple can charge this amount when storage costs elsewhere are dropping (you can buy a 1TB hard drive for less than US$70).

This may be the iPad to get if you’re seriously thinking about using one for DJing purposes. The increased space would mean you could carry more tracks around, and as the latest iPad runs much quicker than its predecessors, track loading and analysis should be nearly instant.

With the arrival of the new iPad, a host of forward-thinking app developers, and increased interest among hardware manufacturers in supporting iOS, the future of DJing on Apple devices is looking good for 2013.

Remember, 2012 brought us multi-route audio, more compatible Midi controllers and incredibly DVS functionality as well, so we have to expect more innovation this year. As always, we will strive to bring you the latest news first here.

Got any good iOS DJ news for us? Will you be buying the new iPad with 128Gb? Please feel free to share your iOS DJ comments in the space below… 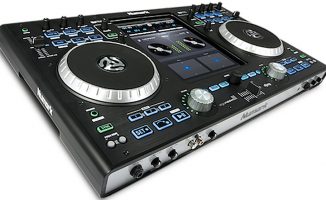