Entertaining an average three million music lovers globally every year, Paul Van Dyk has twice taken the title of the world’s number one DJ – a feat achieved to-date by just two other spinners.

Since 1994’s “For an Angel” (a track that regularly tops trance music’s greatest-ever lists) and his remix of Age Of Love’s “Age of Love”, Paul has concurrently been an in-demand remixer, working with Madonna, Justin Timberlake, Britney Spears, U2, Depeche Mode and New Order.

And as head honcho for Vandit Records, he’s broken the music of many like-minded contemporaries, as well as using his 10-year-standing Soundgarden radio show to disseminate his EDM message. Touring the world an average 16 times every year, he’s more on top of his game than ever.

Today though, he’s taken time out from his busy schedule to be the first DJ in an occasional new series on Digital DJ Tips, which we’ve called “Ten Questions”. In this series, we’ll ask top DJs to answer ten questions for us – questions about DJing, DJ gear, the DJ lifestyle – and, of course, what new DJs can do to get ahead of the game.

1. What separates a good DJ from a great DJ?
Nowadays, many, many things – far too many aspects to cover adequately in a single answer in an interview. One very important one though is striking the balance between musical entertainer and educator. Getting that wrong too often has cost a fair few promising careers.

2. Where was your first regular gig?
Tresor in Berlin, It was still in its relative infancy in ’91, but it was already thriving. I was lucky. One of my friends passed on a tape I’d done to the promoters at the club and that’s how I got my first show.

3. How many people were you playing to, and how long did you do it for?
The capacity was around 500 and I don’t remember many nights when it wasn’t full. I did it for about nine months or so.

4. When did you first know DJing was going to be your full-time career?
I think there are different degrees of “knowing” in this instance. It was probably around the first time I picked up a brown envelope at the end of the night. I thought (as many had before me and many more have done since): “Incredible – someone is prepared to pay me to do what I love doing most in the world.”

5. What do you love the most about being a DJ?
Hard to say. Somewhere between sharing the music I make and love, and watching hands go into the air and smiles go onto faces as a result. It’s all about feedback.

6. What do you find most challenging about the DJ lifestyle?
Delayed air travel. Delayed anything in fact.

7. What’s your current preferred DJ set-up?
I use two keyboards, split between a custom-made mixer from Allen & Heath, two computers, a custom-made controller by Vestax and a few other machines that allow me to interact with the music, whilst I’m playing live.

Set up this way it gives me enormous flexibility to change some of the key characteristics of tracks as they’re being played. This provides a unique experience at every gig. Like a studio-in-a-club, which keeps things fresh and interesting for both the audience and myself.

Great mixing ability is important, of course, but if you’re only going to use it to put together Ace of Base mega-mixes (let’s say), few people are going to shake your hand for it 10 years down the line.

A great music collection is all well and good as long as you select the right tunes from it to play to an audience.

9. What can we expect from you in the next 12 months?
A whole lot. My (R)evolution album is out at the end of this month. It’s the remix “companion” to last year’s EVOLUTION album.

The original versions of the tracks were my co-producer’s and my visions of course. The singles to date have brought some wonderful, creative remixes with them. That provided the seed point for this album and prompted the decision to push ahead with it.

Later into the year I’ll be bringing back my Politics of Dancing mix compilation series and we have a very interesting idea for the next artist album early in the works.

10. If you could offer one piece of advice to a DJ starting out today, what would it be?

Work from the heart. If you’re not playing what you truly love, one way or another it will show.

Also perseverance is key. Don’t expect to get where you want to go in a short space of time. Overnight sensations are very, very few and far between in EDM now. But put the hours in, learn the craft inside out; it’ll be worth it when you get there.

• Thanks to Paul Van Dyk for answering Digital DJ Tips’s “Ten Questions”. Stay tuned for the next DJs in the series… 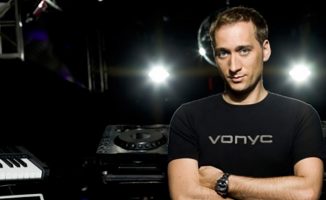