Having exclusively brought you the news of the new Mixtrack Quad at the weekend, we’ve now tracked one down here at Musikmesse 2013, and have a video talking you though this new controller from Numark. In a nutshell it’s a four-deck version of the Mixtrack Pro 2, with Virtual DJ LE in the box instead of Serato DJ Intro – but there’s a little more to it than that, as you’ll see.

The main difference from the Mixtrack Pro 2 is that it has full RGB LEDs that aren’t just pretty, but by clearly delineating the various functions of the pads (loop, FX etc) and also the four channels of the software, help you to know how the controller is set at any one time too, just at a glance.

Apart from that (and the two extra channels for decks three and four, of course) it’s business as usual – it appears to be built to exactly the same spec as the Mixtrack Pro 2 (ie pretty good, but consumer rather than pro quality).

Now you’ve had a chance to see it and especially to see how the lights work, what do you think? A good addition to Numark’s range? Could you see yourself using a controller like this? Please share your thoughts in the comments. 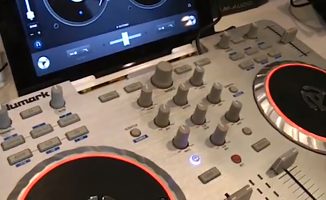 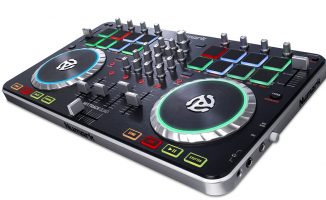