Native Instruments today announced the Traktor Kontrol Z1, “the world’s smallest professional mixer and audio interface”, which works with Traktor 2 on PCs and Macs, as well as being the first Midi controller for the company’s Traktor DJ app for iPad, iPad Mini, iPhone, and iPod touch. Apple-approved (only a matter of time before we see a white special edition in Apple stores?), the two-channel mixer has the same form factor as the Kontrol X1 and Kontrol F1, and runs off external power, meaning it will charge your iDevice when plugged into it. At the same time it offers true stereo club-level dual outputs for full headphones cueing from Traktor DJ.

The Traktor Kontrol Z1 features a two-channel mixer, with dedicated filter/FX control for each channel plus three band EQ and gain, full headphone mix/cue control, VU meters, and 24-bit audio. It ships with a (black) 30-pin iOS lead, although you can use it with more modern iOS devices by using a 30-pin-to-Lightning adaptor, or by using your own Lightning cable. (Unlike some iOS Midi controllers, with the Kontrol Z1 the lead is not permanently attached to the unit.)

It’s due in the shops on July 3, priced at US$199 / €199. Traktor LE is included, and buyers receive a $50 / €50 voucher on registration of Traktor LE; presumably, this can be used against an ugrade to Traktor Pro.

The Traktor Kontrol Z1 would make a natural partner for a Kontrol X1 and/or a Kontrol F1 to make a micro Traktor set-up to use with your laptop and Traktor Pro, but even on its own it will provide a portable solution for Traktor DJs who maybe use timecode in the DJ booth, but want something to practise on wherever, whenever. However, it’s likely to make its biggest splash as an iOS Traktor DJ controller. With this launch, Native Instruments now has an integrated hardware / software solution for the iOS operating system, just like it offers for Windows and the Mac with Traktor Pro and the Kontrol S2 and Kontrol S4. Furthermore, now Traktor DJs can now use the same device whatever “flavour” of Traktor they’re running, and on whichever computing platform.

Whether the whole concept will catch on for actual performance DJing is another question entirely, of course; an NI press shot show the Kontrol Z1 on a surface with an iPad flat beside it, and DJing in this manner is hardly the same as using full-sized gear, but for small set-ups (for instance, behind a bar), DJing on the go, and as a throw-in-the-bag alternative to an existing Traktor set-up, the new Kontrol Z1 – especially alongside the iOS app – ticks lots of boxes.

What are your first thoughts on the Traktor Kontrol Z1? Does this push the Traktor DJ iOS app ahead of the pack? Will you be buying one, and if so, how do you intend on using it? Please share your thoughts in the comments. 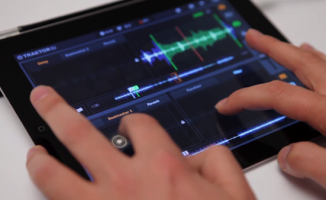