Having been out of the DJ controller game for many years, Behringer has certainly decided to barge its way back in with a controller to cover every base. From the full-sized CMD Studio 4A to five modular controller (yes, five – we’ve got reviews of ’em all scheduled), there’s something for everyone – including the micro DJ controller enthusiasts, which is whom the Behringer CMD Micro Midi Controller, reviewed here today, is aimed at.

The box contains (in addition to the unit itself) a USB cable, some instruction/quickstart/warranty leaflets, and a slip of paper with details of how to get your free Deckadance LE software.

The CMD Micro is a pro-feeling unit: Quite deep, and definitely heavy for its size. Think the “control” half of those dual-box CD players from a few years back. The bottom has six rubber feet, the casing is plastic, and the top plate is thick brushed metal. It’s the same design school as the Behringer CMD Studio 4A – but whereas that controller is let down by cheap-feeling jogs, this one is as pro-feeling as any.

The left-hand end of the unit has a USB socket (and an LED to tell you if the batteries are in use – there is room for two AA batteries for using it with tablet devices)… and that’s it for inputs and outputs. Yup, it’s strictly a Midi controller – no audio interface here.

Each deck has a small dual-use jogwheel (edge to nudge, top to scratch/scrub), pitch fader, two cue buttons, (rather unnecessary) pitch bend controls, plus play/pause and cue buttons – and the obligatory “sync”. All the buttons are backlit. Meanwhile, the mixer section is simply two line faders, a nice (but cramped) crossfader, and levels for cue and main. The controls are completed with a nice stepped infinity knob for track selection and left/right load buttons.

The Deckadance LE software has a rather laborious registration/download process which is described in detail in our CMD Studio 4A review. Suffice to say it’s very “last decade”. Once you’re up and running though, it’s an OK piece of DJ software to get acquainted with the art on. The controller is of course mappable to other devices, and indeed there’s a Traktor mapping on Behringer’s website.

To set Deckadance up so it works with this unit involves setting up the hardware itself in the Deckadance preferences, then setting the audio so you can actually hear something. If you want to use this “properly” (ie with headphones cueing as well as master out), you’ll need either a DJ/mono splitter cable or a separate DJ audio interface. For PC, you’ll also need an Asio driver. This is pretty standard stuff.

My expectations from such a small unit were modest, and it actually exceeded them. The dual-use jogs are a novelty at this size/price point, and work well enough. Don’t get delusions of scratching grandeur though – they ain’t up to that. Obviously EQs are a huge thing to forfeit, and for me, the pitch bend controls are utterly unnecessary. It’s not hard to image a redesign with the decks moved a bit futher left/right and room for missing EQs on the mixer, even if only two-band per channel.

The unit is “class compliant”, which basically means you don’t need drivers for the thing I’m about to talk about: using it with “tablets”. (This means iOS, of course. Good luck if you want to use it with Android.)

What isn’t mentioned anywhere in the instructions is that it isn’t “Apple compliant”: That means you need to use the Camera Connection Kit “hack” to get it connected, and it won’t charge the iDevice once it is. Then you need to find software for it to work with; again, no mention anywhere in the box how you’re meant to go about that. A quick email to iMect, makers of DJ Player (the most “universal” iOS DJ App I know of) confirms that it “should” work fine with that company’s app, but you’ll probably be mapping it yourself.

We certainly didn’t have the time it would take to DIY this for use with a tablet, and if you want a DJ controller to work with a tablet (let’s face it, with iOS), there are better choices out there. Nevertheless, this is what the batteries are for (to stop it drawing power from such units); weirdly, the LED indicated the batteries were powering it even when I had it connected by USB to my MacBook Air.

The Behringer CMD Micro. It’s well built, it’s cheap, and it’ll fulfil a niche need. Who would want such a controller? Well, probably not iOS DJs, despite the marketing blurb on the box. Sure it’s “class compliant” and has iOS-friendly battery power, but Behringer needs to offer some support if it wants people to take the unit seriously as an iOS controller. No, rather, it’s going to appeal to PC/Mac DJs who want something small they can throw in a bag or squeeze into a squashed space, and who want it to be able to practise on or perform inconsequential gigs with.

I can see it living happily behind the bar in a small venue, the kind of venue that also has music and sometimes has a bit of late-night DJing; it’s well enough made to stand semi-pro use such as that, and certain functions – build quality, backlighting of knobs, dual-action jogs, the pleasing library scroll control – are good fun to use.

If Behringer had squashed in an audio interface and/or EQs it would have been approaching what I consider the minimum standard for an all-purpose controller. As it is, these omissions (plus the hacking needed to use it with iOS) will limit its appeal. But for those for whom these things are not an issue or are surpassable, it is a well-made little device that should stand the test of time. For the price, it’s certainly better than most comparable DJ controllers.

• Want to know if you can scratch with this controller? Watch this exclusive video to find out. 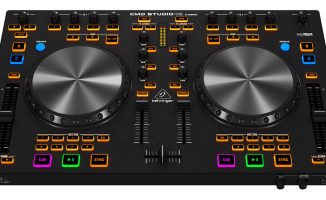 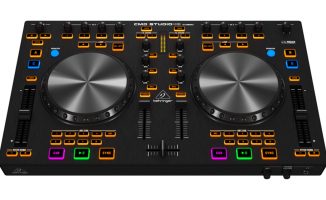