In a major update, DJ Player – the self-confessed “ugliest and hardest to learn” iOS DJ software – has been completely revamped for v7, with performance improvements but also a total visual overhaul.

“We are performance geeks in every direction, which had its impact on the user interface,” admits developer Gábor Szántó. “The new version of DJ Player has a totally new UI, and not just the graphics have changed: all workflows were redesigned for ease-of-use, conformity and way shorter learning curve. The pro usage is still important, but it’s really fun to use DJ Player everywhere now, not just in the DJ booth,” he says.

Some of the features of the new look include easier looping workflow (similar to CDJ-2000), easier syncing, and simplified effects. Alongside Bluetooth audio and AirPlay, the new default Midi mappings offer tighter integration, and for the Jesus-pose crew, Flo Rida’s Beamz laser controller is now supported. More seriously, super-low device utilisation means improved battery life and smooth graphics even on the iPhone 3GS and the first iPad: The iPhone 5’s A6 processor could theoretically run 32 decks simultaneously with DJ Player! There are some lesser-used features that have been dropped though, including single-deck mode and custom backgrounds.

The developer has always claimed DJ Player to be the best DJ app for true rock-solid club use, and if v7 solves the looks/usability issues that have scared many potential users off, the hardcore of users who agree with him may just be added to by new converts.

Are you a DJ Player user? What do you think of this new look? Please share your thoughts in the comments. 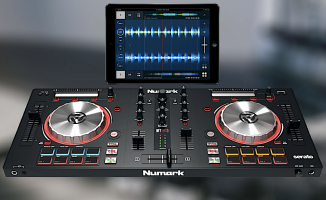