Modular DJing – having a small control device or two to control certain aspects of your DJ software – has great appeal for many DJs, and the runaway success of the original Traktor Kontrol X1 proved that. Designed really to let DVS DJs (ie DJs who use a club’s decks or CDJs to control their DJ software) control loops, cues and FX, the diminutive little X1 ended up being used as a two-deck controller all on its own, no CDJs or record decks required, by a fair number of adventurous DJs.

But what it lacked was a decent substitute for the jogwheels. Unless you’re the most regimented of electronic DJs, being able to manually beatmatch, nudge, scrub and even introduce a few vinyl effects is still part of DJing, and was missing from button-box modular controllers – until the Traktor Kontrol X1 Mk2 arrived, that was. Because while the Novation Twitch famously pioneered the touchstrip concept, the Kontrol X1 Mk2 developed it further and slammed it right there in a controller so small it can practically fit in your pocket.

If you’re used to jogwheels though, the idea of touchstrips may be a bit alien. But actually, once you’ve used them, it makes sense. All they do is introduce a “progressive” control among the knobs and buttons – something you can do more with than just turn or push. Something a little more expressive. Whether doing it involves moving your hand from side to side or clockwise or anticlockwise suddenly becomes kind of academic.

In this short video, I introduced modular DJing and the Traktor Kontrol X1 Mk2, before going into detail as to what the touchstrips do on the unit. Hopefully it’ll let you see the possibilities and decide if micro / modular / minimal DJing might be something you want to play with.

So – let us know what you think. Are you a manual beatmatching DJ who now feels they could get it done on a single X1? Do you already do this? Or is it just too fiddly and “unlike DJing” to really appeal to you? I’d love to hear your thoughts in the comments. 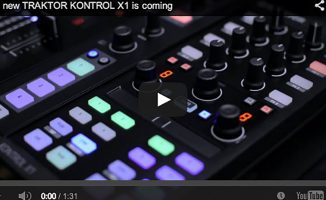