So you want the most mixer possible for the buck, right? If you’re just starting out and you’ve got high ambitions, you may get a distinct feeling of “meh” when you look how far your money’s going to go with the top brands. Behringer knows this and has always attempted to offer high-value products that what they lack in originality, they make up for in pure features-per-inch.

Enter the NOX606 mixer. I don’t think I’ve ever reviewed a mixer with so much “on it” (although the 1010 in the same series looks like an absolute beast…) The NOX606 is like an Allen & Heath Xone:92 with FX built in. There’s a digital audio interface for recording/playback of computer audio, six channels, again distinctly Allen & Heath-esque hardware filters, a huge variety of ins/outs and configuration options, comprehensive metering, even rack mounts so you can fix it into a case or desk. On the face of it, some pretty high-end features. And all for the frankly silly price of around US$280.

But does it cut too many corners? What’s the sound quality like? Will it last? Is it better to save up and pay two, three times more for a similar mixer from someone like Allen & Heath or Pioneer? Those are the type of questions we hope to answer today.

It’s a big, black box, standard club mixer size (think Allen & Heath Xone:92 to which it owes a huge debt, or Pioneer DJM-900nexus), with four main channels up the middle, two mix channels down the left, and frankly, dozens of extra controls dotted all around. There’s absolutely no knobs, sockets or switches on the front (so you can use the supplied mountings to have it flush with a surface, for instance), but round the back are the expected pile of inputs and outputs.

The unit is surprisingly light when you pick it up, but feels well built enough; a product of being aluminium, not steel; the Allen & Heath Xone:DB2 and DB4 are similar in this respect. The unit we had didn’t sit quite flush to the surface on its four rubber feet, having a bit of a “wobble”, which was a shame.

Let’s take a quick tour of the top panel, then. It’s a little confusing, to be honest. The flexible filter sections stand out (think Allen & Heath); there are only two but they have a large number of controls (more later). They flank the main four channels. The FX section is at the top of the mixer, above the main channels, and as mentioned, the two full aux/mix channels are down the left, with lots of cue options, EQ, talkover etc – they’re definitely fully featured.

The output controls are down the right with two independent mix outputs, a booth output, and really strong cueing options too. While the aux/mic channels only have peak meters, there are full eight-bar VUs for the four main channels, plus stereo master VU too. Quality of knobs, buttons and faders is average overall; the main four-band EQ knobs feel nice, the crossfader is loose enough, but the buttons feel cheap and there is wobble on the smaller knobs too.

Round the back, the layout is quite confusing again, but it’s nothing if not comprehensive. We’ve got four switched line/phono inputs (two with grounding posts); two XLR mics with mono or stereo mic/aux TRS inputs that double up as returns for the send/return loops; four outputs which across XLR, TRS and RCA offer twin independent master outs, booth and record; plus the all-important USB, not-so-important Midi DIN out, power socket and on/off switch.

Just a word on the USB: you can use it to record the mixer’s output straight to laptop (for instance) and you can also use it to input a stereo channel to one of the mixer channels, but it isn’t a comprehensive sound card that would let you, say, use all four channels of a DJ software program on all four channels of the mixer. The NOX606 is essentially a hardware mixer with very basic USB / sound card functionality built in.

Bearing this in mind, setting the device up is simply a case of plugging in all the inputs you want to use (CDJs, vinyl, mics, external FX units via the send/return – think Pioneer RMX-1000, for instance), and if you’re using a laptop DJ program, setting it up for direct hardware control for those inputs (DVS plus audio interface, control over CDJs using their built-in sound cards etc). Again, the Behringer is essentially a “hardware” mixer; something like the Traktor Kontrol Z2 has far more software integration with Traktor than this could ever manage, despite this having about 10 times the overall controls on it!

On powering up, the two big “tap” buttons for the two filter sections (you can assign the filters to whatever channel you like) flash to indicate “beat”. It soon becomes clear why this is: If you want the filter LFOs to “follow” the beat, you have to tap it in manually: That’s right, no auto-BPM detection like on Pioneer club mixers, for instance. Same with the FX section (there’s one FX section only here).

The filter sections are – like the Xone:92 – comprehensive, with optional LFO (at least here there’s a x2 button) a “mild to wild” knob for resonance, and a fun VCF to XFADER button that lets you assign control of the filter intensity to the crossfader; this way using the crossfader curve you can intensify or lesson the “cut” of the effect easily. You have low-pass, band-pass, and high-pass filter buttons.

With the FX section, moreover, once you’ve keyed in the beat manually, the ability to then halve, double etc the LFO is hampered hugely by the fact that the FX timings are not on a pair of buttons for half/double, but rather on a continuous knob marked “frequency”, which for me really limits its usefulness. The four-band EQs are good, although slightly weirdly, only the far bottom and far top EQs actually kill (so it seems), the other two bleeding a bit even at lowest settings.

I found the FX to sound OK, with the vocoder (which is actually more like a ring modulator) something you could have a lot of fun with using a microphone, but I did miss some basics (would have been good to have some kind of transform/gater, for instance). They feel like they’ve just been plonked in to add a bit of extra value. I sometimes noticed an audio click when turning the FX engine on and off. The effect unit is pre-fader unless you assign it to the master output.

The outputs are very generous; there are two independent master outputs with their own volume controls; the booth output has a stereo/mono switch (good if you’ve DJing through a single booth speaker, for example) and a booth “mute” switch; and there’s a record out too. The cue section has switchable EQ in case you want to monitor your source before the EQ settings have been employed; a split cue button; and switches to easily let you monitor aux 1 and aux 2.

Speaking of the aux channels, they are one and the same with the two mic channels, so it’s a six-channel mixer effectively. Again they’re four-band EQed, but they only have a “peak” light rather than full VU meters.

Any channel can be sent via a send/return loop to the two aux/mic inputs; this way you can set up an external FX unit and the options for doing this are highly flexible. Combined with the four phone and four line inputs this makes for a lot of possible set-up options; the only crippling option is for the digital DJ who wants to use this unit with more than one digital (ie laptop) source; as mentioned earlier, only one channel has a USB input source and you can only record one stereo out too; so it’s basically a two-in, two-out sound card; as basic as it gets, in other words.

Sound quality-wise, the effects sound pretty good (if not subtle – I mentioned the “click” on engaging sometimes, and frankly I think you’ll find yourself using the filters more); at least the filters are a lot of fun and highly specified. They were a bit noisy I thought, though, with audible hiss on some settings.

As with many Behringer products past and present, this mixer offers a mix of high spec with head-scratching strangeness and, ultimately, whether it’s for you depends on how much you want or would miss things you may expect to be here. Decent USB in/outs; auto BPM counter and more comprehensive FX are just a few things you’ll find on mid to pro mixers in other ranges that you may miss here.

It’s undeniable that for the price you’re getting a lot of mixer for your money; if you’re looking for a huge number of inputs, highly versatile routing, something pro-looking that you can mount in a dedicated enclosure, and you truly don’t have a huge amount of money, this may be something you want to add to your list.

At the same time, though, although it is attempting to be a copy of the Xone:92, it definitely lacks this mixer’s elegance and sound quality (and price tag, of course). and at the same time, misses features such as auto BPM counter that even Pioneer’s more basic club mixers have nowadays. In a way, maybe just a straight copy of something more expensive would have made more sense!

As I say, ultimately it is down to the features you want, and whether you’re happy to like with some of its idiosyncrasies (the VU meters, in particular, had me scratching my head). If so, you can pick it up for a bargain price. Even for digital DJs who may baulk at its lack of decent USB in/out options, actually, with two direct-compatible Pioneer CDJs plugged into your software, having a single USB out for recording may be more than enough.

Finally, a word on quality. Behringer guarantees all of its gear for two years, but even so, this feels a little lightweight and more worryingly, the buttons feel like a weak point; anecdotal evidence is that models have even arrived with buttons loose in the box.

If you want a mixer to use at home or for light commercial use it would probably be fine, but this isn’t a pro mixer – nor should you expect that at this price. And that’s the thing, ultimately: price. You’re not getting Pioneer or Allen & Heath here, but you’re not paying those prices, either. The compromise is ultimately something you’d have to decide on.

Do you own this unit? would you be tempted at this price? Does it tick your boxes, or do you think the mix of features is a little strange as we do? Let us know your thoughts in the comments. 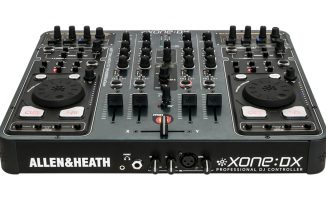