The Mixtrack Edge prototype was first revealed at least year’s Musikmesse in Frankfurt. It was a daring take on the DJ controller idea, having a size roughly equivalent to an iPad, but we didn’t get to take full advantage of it as it wasn’t in its final form just yet. We’ve now been able to take some time using it. So: Is it a portable unit worthy of your next summer barbecue gig, or is it step too far in minaturisation? We find out in this review…

For such a thin controller, the Mixtrack Edge actually feels pretty solid: At just a little under two pounds, it’s not a hollow piece of plastic. It comes with its own hard cover (nice touch!) and, when opened, reveals a predominantly brushed metal faceplate replete with plastic faders, knobs and a lot of buttons. You also get two tiny metal jogs. The lid has rubber feet on the inside, and you can fold it under the unit to keep the controller in place.

Previously, this came bundled with Virtual DJ LE, but ever since Serato DJ expanded its line of controllers to include the Mixtrack Edge, the package now comes with Serato DJ Intro. That makes it definitely the smallest Serato controller out there!

Connecting the unit to my laptop running Serato DJ was quick, and I just used the supplied leads to connect to my soundsystem. Having set up, I started playing around with the Mixtrack Edge.

The first thing that seemed odd to me was how the jogwheels worked, as I couldn’t scrub through a song using them like your normally would. As it turns out, you’ll have to access a sort of “shift layer” for the jogwheels to go into scratch mode (more on that later).

Instead, I was controlling the headphone cue mix with the jogs. This has the potential to be very disorienting for first time users, as you kind of expect jogwheels on a DJ controller or CDJ to do one thing: Jog through the song, whether by scratching or pitch bending. Having to press buttons just to make this happen seems counterintuitive, and unfortunately bogs down the initial DJ experience.

The mixer section of the unit is composed of two channel faders and a crossfader. Keeping in line with the concept of a slim controller, the faders for these hardly rise from the Mixtrack Edge’s facade, so don’t expect to pull off any fancy crossfader scratch tricks. They also feel a bit flimsy, wobbling when you slide them up and down and left to right. If you’re doing simple cross and volume fades, they get the job done.

The EQ on the Mixtrack Edge is limited to two per channel: treble and bass. The controls resemble flat dials more than knobs, but for such a thin device the idea behind it is quite impressive. You may find it hard to twist accurately at first, especially since they seem to share that wobbly feel as found in the faders, but increased usage gets you familiar with them. It’s like using a touchscreen to do EQ tweaks, but this time you have to limit yourself to the diameter of the flat knobs as opposed to the full length of the screen, as is the case with most DJ software and control apps.

The transport and cue buttons are placed at the bottom of the unit, and are made of the same kind of hard plastic material as the rest of the buttons in the Mixtrack Edge. It’s a clicky sort of button, unlike the ones found on a Traktor Kontrol S4 or even the soft ones on a Denon controller, and while they are responsive, you may have a bit of trouble making really fast cue point triggering with them as they don’t spring back as quickly.

There are only three cue point buttons per deck, which should be fine for less demanding DJ performances. The sync button is featured prominently, and you may even find yourself using it sometimes as there are no actual pitch faders on this unit. If you want to control your track’s tempo, you’re going to have to press the “Pitch” button on the unit, which transforms the jogwheels into pitch controls, and adjust accordingly.

While having a controller as small as this does make it portable, certain sacrifices must be made in order to fit in all the controller functions. In lieu of more faders and dials, features like headphone cue mix, scratching, and even library browsing are relegated to the jogwheels, and the way you enable these features are through buttons located in the middle of the unit above the volume faders.

All that button pushing can get quite confusing, especially when you take into account that you have a red “Shift” layer and a blue “FX” layer, too; these let you access shift functions in red (the Shift button) and shift functions in blue (the FX button). It sounds complicated on paper, but in practice (albeit quite a bit of it) it becomes second nature.

The effect controls on the Mixtrack Edge reside as shift layers of the treble and bass EQ dials. By pressing the blue “FX” button in the middle of the device, you gain access to the blue shift layer and, in this case, controls for FX1 and FX2 in Serato DJ.

There are six sampler buttons on the device for use with Serato DJ’s SP6 sample player, which is a nice addition if you’re a sample-heavy sort of DJ. For those of you who don’t want to have anything to do with samples, you could just remap these buttons to something else more basic, such as Load buttons (so you don’t have to press Shift + headphone cue button to load) or even just more hot cues.

Perhaps the weakness of the Mixtrack Edge lies in its desire to overreach its utility: Instead of having multiple shift layers to access extra functions, maybe a layout with just the fundamentals (jogs, pitch faders, transport, hot cues, mixer section) would’ve sufficed. However, I do understand that this is a contemporary DJ controller, so the implication is that there must be controls for sample players, auto and manual loop, and the other bells and whistles that have become standard in the digital age.

I would’ve wanted proper pitch faders somewhere on this device, as that would reduce some duty from the jogwheels. In a controller designed to have the jogs do the bulk of the work (browsing, scratching, tempo adjusting), I would have liked that the jogwheels be larger since it’s essentially one of the most important aspects of a tiny controller like this.

A feature that could have been added to this would be native iPad integration. Since it looks like one already and is truly portable, having some sort of compatibility with software like Algoriddim’s djay would’ve been a nice touch and would position it more strongly so as a portable device.

In the end, Numark has taken a step forward in creating something truly portable and, if you don’t mind the button pushing and switching, the Mixtrack Edge is quite fun to use when you’re not in front of your main kit.

How would a portable controller like this fit in with your current set-up? Should such a controller be stripped to the bare essentials, or do you think a more full-featured device such as the Mixtrack Edge is a good idea? Do we even really need portable controllers to begin with? Let us know you thoughts in the comments below! 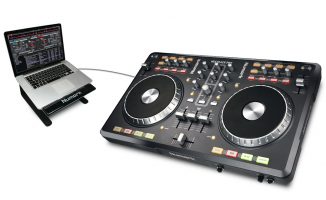 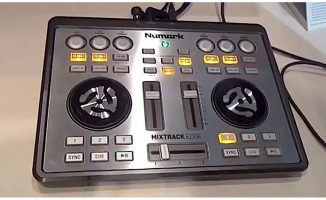