Griffin’s DJ Connect is a professional, compact DJ audio interface designed for iPad, iPhone and Mac, and optimised for Algoriddim’s djay software. Just announced, the DJ Connect is a dual output, full stereo audio interface powered by your device’s connection port, whether that’s a USB plug for your Mac, a Lightning connector for newer iOS devices, or the legacy 30-pin ports for past Apple gear.

DJ Connect has been engineered specifically to bring true plug and play functionality to the Algoriddim’s djay apps, although it should work with similar audio software and apps too. It has a big volume knob for controlling the volume in your headphones, delivering 16-bit, 48kHz audio to both phones and main outputs, with an 1/8″ stereo plug for your headphones, and a pair of stereo RCA jacks for connecting to your main speakers

The advantages it has over the Traktor Audio 2 (Native Instruments’s device that performs a similar role) is that you don’t need to connect a 1/8″ jack-to-RCA plug, making for a less cluttered set-up, and unlike the Audio 2, it comes with both types of iOS adaptor. However, the Audio 2 has a port for an external power supply that you can plug in should you want to charge your iOS device at the same time, which the DJ Connect doesn’t, and we’re unsure at the moment of just how much battery power the DJ Connect would drain when in use…

Why use an external audio interface at all?

Somehow or other, you’re going to want a separate cue (headphones) output to your master out. Devices like these give you a big advantage over one of the other existing solutions, namely a DJ splitter cable, because while splitters solve the issue – halving your device’s stereo signal into two outputs so you can cue on headphones, albeit in mono – they do so at the expense of some audio fidelity as they rely on your device’s built in sound card.

• DJ Connect retails for US$99 and is available right now.

Do you use a portable sound card when you DJ, or would you rather take along your DJ controller and output through that? Do you think iOS DJ apps with hardware like this are starting to mature into a truly portable DJ solution, or are they still “secondary” to their laptop software counterparts? Let us know what you think below! 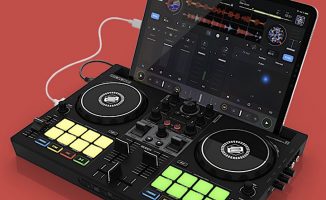