Numark has today announced the Numark NV for Serato DJ, the first of what we’ve long been predicting will be the next big wave of digital DJ controllers: Devices with high-resolution colour displays built in, to show all critical information and potentially leave the digital DJ free to play without ever having to look at a separate laptop screen again.

With the US$699 Numark NV (and unlike an earlier take on this idea, the Stanton SCS.4DJ), you still need your laptop plugged in, but you can have it totally out of sight. Indeed, as long as you can set it up to remain running with the lid closed (there are utilities that can help with this for Mac, for instance), you can tuck it out of the way fully folded. All waveform, library and other important info is available to you right there on the Numark NV’s colour screens, removing one of the big barriers between crowd and DJ – at least in the eyes of some.

Those screens in full…

A raised, sloped 4.3in backlit screen for each deck shows waveform information including cue points, FX settings, library and Serato’s rotating platters, switchable using the panel, view and library buttons and knobs located to the left and right of each screen. Here is where you’ll also find the deck selector button, and items directly related to the track/waveform; things like BPM tap, pitch range/keylock and the beatgrid controls for on-the-fly beatgrid correction.

From what we’ve seen the screens appear to be bright and they’re full colour, but they aren’t touchscreen. Also, even if you’re running Serato’s Video plugin, they can’t be used to show the videos you’re DJing with, which – while we’re told it would have been a big technical challenge – is definitely an opportunity missed. However, as long as they are as smooth in use as those of your average laptop, and of controllers like the Pioneer CDJ-2000 Nexus, they ought to be up to the job.

As far as software control goes, the Numark NV is highly specified, delivering the full Serato DJ experience. There are four full channels of control over Serato DJ (the software comes with the unit – no need to upgrade from Intro for an extra fee as with lower-end controllers); all of the performance pad options that are present on the Numark NS7II are also present here, including velocity sensitivity and Serato’s Slicer; the capacitive (touch-sensitive) knobs have also been ported across from the NS7II, alongside its Filter FX; and each channel has an individual software filter.

Hardware-wise, the unit has pro features such as long-throw pitch faders, a cue split button (rare on controllers nowadays and good for DJing where booth monitoring is poor), a replaceable crossfader with crossfader autostart, and both booth and master outputs, the latter being in both unbalanced and balanced (XLR) flavours. It appears Numark has learned from the limited metering options offered on the Numark NS6, because as well as having five-band master output VUs, the Numark NV has added individual VUs for each channel. However, there is no standalone mixer functionality, with the only extra input being a switchable Aux channel (switchable between a line input and a TRS mic input), with a mic tone and an overall gain control.

Numark says its jogwheels are more reliable than most, being able to sense the environment the unit is being operated in in order to deliver just the right touch sensitivity (this can be a problem with capacitive jogs from other manufacturers, some of which have manual “sensitivity” controls to get around the issue). It’s obviously something we’ll test when we get to review it, although it has to be pointed out that at just 5in, the jogwheels are quite small (same size as the Mixtrack Pro 2, for instance).

Overall, the Numark NV is about the size of the Traktor Kontrol S4, which in itself is a tacit admittance from Numark that this is about the right size for a DJ controller nowadays – not so small as to be fiddly, not so large as to be unable to be carried in a decent sized backpack. However, with those large, sloping screens, it has a real dose of the design aesthetic of “two CDJs and a mixer”; it’s very Pioneer-esque. (To us, this suggests a further merging of what DJ gear should “look” like in order to be broadly accepted as such by venue owners, the public and so on.)

We’d be lying if we said this is a huge surprise to us. We predicted way back in October 2013 that Traktor’s future will involve in-built controller screens, and we outed an internal Numark Serato all-in-one controller render along the same lines as this back in April this year. With screens becoming cheaper and better (and the persistent criticism aimed at digital DJs spending half their time “checking emails” on a laptop screen), this was a problem waiting to be solved.

“NV has that ‘X ­factor’ DJs have been searching for,” says Karl Detken, Numark’s marketing director. “It completely re-­imagines the DJ experience while infinitely expanding creative performance options. Feedback elements are placed in the middle of the action, not away from it. The crowd will never again question what the DJ is doing in the booth, nor will the DJ question what they are doing with their hands.”

By Numark’s own brief, then, how well the Numark NV succeeds in doing so will depend upon the quality of those screens, whether the company has got the size/features right overall, and ultimately, how much fun it is to DJ with your laptop tucked away and the controller’s screens as your only visual interface with the software. After all, you’re going to lose parallel waveforms, and the size of these two screens added up isn’t going to come close to the size of a 13″ laptop screen.

Would you end up keeping your laptop in view after all, and therefore end up consulting more screens than before? Would this be such a bad thing, with your library permanently open on your laptop and the waveforms on the unit, for instance? Or will you find yourself reverting 100% to the laptop because you just can’t get on with on-board screens? All these are things that only DJing with the unit will make clear.

What’s interesting is how similar (albeit in a “shrunk” format) the Numark NV is visually to a Pioneer CDJ set-up; higher end CDJ set-ups show a lot of the same information on their screens, and the difference is simply that with CDJs, you plug in a pre-prepared USB containing your tunes, whereas here you plug in your laptop with Serato DJ running. (Then again, Pioneer CDJs with HID mode and Traktor, for instance, can interface very visually, too…) Another comparison would be if Pioneer had put screens similar to this on the Pioneer XDJ-R1; I wouldn’t put it past them to do exactly that on the Pioneer XDJ-R2 (or whatever they decide to call any XDJ-R1 follow-up). See how things are merging?

Another interesting point is the size/quality of the unit, described on the box blurb as “ultra thin”. I’ve not handled one, but I expect it’ll be quite lightweight (like the Traktor Kontrol S4, containing a fair amount of plastic), but more professional in feel than the Mixtrack Pro 2, for instance. This overall size/weight balance is starting to become the dominant, preferred one for DJ controllers, as I touched on earlier. After all, the physical size of a controller doesn’t have to be huge apart from to make the units appealing to DJ on, and once you go past a certain size, you lose the ability to move the thing around easily, and to carry it with you as hand luggage on planes – a crucial yes/no question when it comes to controller dimensions. Digital DJing has always been about portability, and it’s good to see Numark recognising that here in a higher end controller.

Should the Numark NV do well, it will definitely start a far-reaching shake-up in the DJ controller world. After all, there are many companies vying for your attention, and the barriers to entry have got lower and lower as near-identikit controllers have flooded the market in recent years. A successful Numark NV could well prove to be a “put up or shut up” moment, with companies that won’t commit the research and development into adding decent screen to their own controllers choosing to get out entirely. That Serato itself is excited about the development is clear:

“With its embedded, full-colour screens, the Numark NV is a breakthrough in digital DJ controller technology,” says Serato CEO AJ Bertenshaw. “Numark has achieved an unprecedented level of integration with Serato DJ that blurs the line between hardware and software. We cannot wait for performers to experience it first-hand.”

Ultimately, the Numark NV will succeed if it hasn’t dropped any design balls (it doesn’t appear to have done; everything seems intuitive on the unit); if the public like the size/weight/price ratio (I believe the public indeed will); and if the screens make it fun in use – more fun than DJing with a laptop display.

If the final point proves to be true, the fact that the DJ can tuck his or her laptop away is definitely a game-changer as far as the public perception of digital DJs goes. And – especially as we’ve been debating the question all this week on Digital DJ Tips – it begs another question: If it is possible now to plug a DJ controller into a closed, hidden laptop, why not also have a similar system designed for the iPad? Or for Windows Surface? Or, even with a full custom OS built in?

Over to you Pioneer, Native Instruments, and – indeed – Numark. Exciting times…

• DJs will first see the Numark NV at DJ Expo, August 11-­14 in Atlantic City, New Jersey. The unit will be in stores this autumn for US$699. More info on the Numark NV website.

Your thoughts? Is being able to hide the laptop a good thing? Do you think those displays will be up to it? Should it have been designed so you didn’t need your laptop at all? And ultimately, will this be more or less fun to use than a controller with a laptop open taking display duties? Please share your thoughts on the Numark NV in the comments. 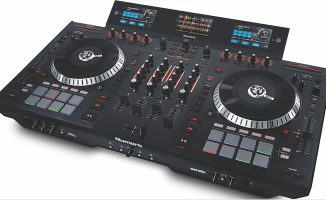