Digital DJ Tips reader Shaun writes: “Are iPads slowly starting to become more acceptable pieces of equipment for DJs to use? And, would you expect to find them in DJ booths up and down the country in the near future? So many DJs use Apple’s MacBook, usually for their reliability. So, how far behind are iPads? Will it just take a Pete Tong or a Sasha to start using one, and that will be the next new ‘trend’ for DJs?”

Good time to ask this question, as for part of my research for a forthcoming training course, I actually played a gig using an iPad just this Saturday last. (I used it with Algoriddim’s djay app and the Reloop Beatpad). So I’ve got some fresh ideas on this.

Firstly, it probably won’t become common to turn up with a music library and DJ software on your iPad in “pro” DJ booths any time soon. Lord knows it’s taken long enough for laptops to gain any kind of acceptance there and I can’t see yet another switch likely soon. But for mobile gigs, it’s markedly different.

The Beatpad plus an iPad is a remarkably powerful, portable and stable system. I used it for an eight-hour DJ set with no problems at all. It’s far less hassle than a laptop, and anecdotally, I’d say more reliable too. As long as you organise your DJ music using iTunes on a laptop anyway (most DJs do), it’s no problem at all to sync with your iPad and play from the iPad’s internal library.

I’ve also used Traktor DJ extensively and again, it’s easy to use and perhaps even more immersive than djay, due to its “touch the waveforms” workflow and simplified functionality that strips digital DJing back to basics. What’s exciting about Traktor DJ is that it could only really happen on the iPad – and it’s all the better for that.

I don’t think iPads will ever replace laptops entirely as I still think you really need a laptop to do your music organisation on and then use the iPad as the DJ software / playback device, but when you consider that Android is finally making leaps forward in its audio capability, and that Windows Surface devices are slowly gaining ground too, the tablet per se is definitely not going away and will continue to make inroads into DJ set-ups – but not fast, and probably not (in my opinion) into pro DJ booths.

Do you DJ using an iPad for DJing? Do you think there’s a place for iPads in DJ booths? What do you think would have to change for tablet DJing to gain wider acceptance out there? Please share your thoughts in the comments. 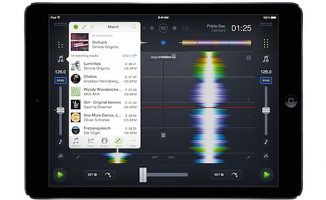 Do You Use djay On The iPad? Let Us Help You!