Mixvibes has just released the latest version of Cross DJ for Android. Now in its 2.0 iteration, the update brings Cross DJ on Android much closer to its iOS counterpart. One addition is a new Waveform View that takes a cue from Traktor DJ for the iPad, essentially letting you “touch” the waveforms for transport or scratching. Other features also include key detection for harmonic mixing, a BPM-synced sampler for dropping loops that match to a currently playing track’s tempo, and side tabs for decks A and B that let you tweak EQ and other functions as needed.

Although there are a couple of DJ apps for Android, there is currently very little choice with none of the very biggest players present, unlike on iOS where users are spoiled for choice (eg Traktor DJ, Algoriddim’s djay, DJ Player, etc). This is therefore an important upgrade to Cross DJ, giving Android users a chance to experience “true” tablet DJing instead of a watered-down iOS port or an inferior clone.

• Cross DJ 2.0 for Android is available now and is a free upgrade for existing users. New users can purchase it for US$9.99.

Are you an Android device owner who’s been envious of folk who can DJ with their iPads? Will this change your mind about portable DJing on Android? Let us know what you think in the comments below! 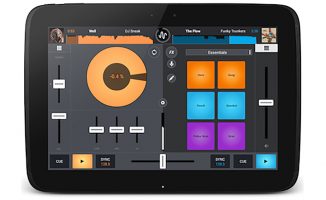