Native Instruments has quietly released its latest update to Traktor DJ. Version 1.6 brings Audiobus integration, which lets you chain Traktor DJ with other iOS music software like Garageband and Effectrix. The update also lets you export your mixes directly to Dropbox or any other app on your iOS device that can receive a WAV file.

Audiobus is a separate app that acts as a conduit for other apps: You select an input source (eg Traktor DJ), choose an effects app like Echo Pad, and then finally choose an output app like Garageband that receives all the audio. This lets you route audio from Traktor DJ’s mixer output through another app’s effects instead of being constricted to what Traktor has onboard, giving you an FX canvas limited only by the apps on your iOS device. Of course, this is only the tip of the iceberg as you can experiment with different combinations of effect and synthesiser chains with which to process your mix through.

• Traktor DJ 1.6 is a free update for existing users. For new users, it costs US$0.99 for iPhone and US$9.99 for iPad. Want to know all the other changes? Find out over at the App store.

Do you find yourself running your iPad through a separate hardware effects unit to add more processing during live performances? What chain combinations are running through your head right now? We’d like to know! Share them with us in the comments section below. 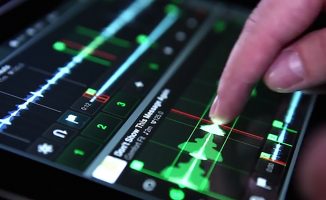 Traktor DJ 1.5 Arrives With New SuperSlicer As An In-App Purchase