We got to get a look at Reloop’s new products at their stand here at NAMM 2015. While the company had no big announcements, it did have a couple of turntable variations and a new mixer to show, namely the RP8000 Straight, the RP7000 silver and the RMX60.

The RP8000 Straight turntables have the straight tonearm preferred by some scratch DJs for its superior tracking in the groove, and were on constant demo on the stand. Meanwhile traditionalists may well pause to admire the RP7000 Silver turntable, looking as it does very much like the classic Technics SL1200.

The RMX-60 is a club-type four-channel mixer with scaled down effects over its RMX-80 stablemate but other than that appears extremely similar. Maybe Reloop calculated a model with a slightly lower price point would generate a lot more sales because there isn’t an awful lot to choose between then.

So nothing huge from Reloop here, which of course makes us think they have something big up their sleeves for the Musikmesse show in April. Watch this space for that…

Do any of these products appeal to you? Maybe you’d like to see a pair of silver RP7000s as part of your set-up? Let us know your thoughts in the comments. 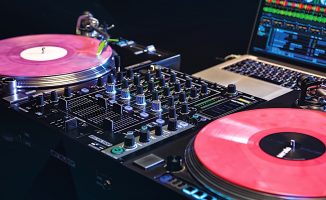