In a world first, we got a sneak peak at a late prototype of the just-announced Hercules DJControl Jogvision controller here at NAMM 2015, the company’s latest model and the first launched in conjunction with Serato, whose DJ Intro software will be in the box with the unit.

The controller has two frankly gorgeous jogwheels, huge for the size of the unit, and containing visual feedback in the centre similar to the way Pioneer CDJS operate, to show you track timing and cuepoint reference for scratching.

Hercules explained to us the lengths the company has gone to in the hardware to make the visual feedback latency-free so it feels natural for scratching, and while we didn’t get to see the unit plugged in, we can report the feel of those jogwheels is brilliant – they’re properly weighted and smooth, and in all honesty a big surprise on a controller pitched at this price point.

That was the final surprise: Hercules has confirmed the price point as being just US$299, which makes it one of the very cheapest Serato DJ controller available (the exact same price point as the Mixtrack Pro 3, for example), which offering a spec that is anything but first rung. We look forward to properly reviewing this as soon as it’s in production.

Does this controller appeal to you? Do you like the look of those jogwheels? Is it a smart move for Hecules to pair up with Serato? Please share your thoughts in the comments. 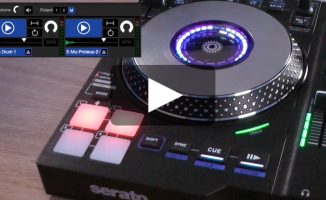