Wow, how lighting has come on since the days of big, hot, expensive and unreliable individual units, that were largely practical only to install in venues and for the most serious mobile DJs. Nowadays, the advent of chip-controller LED lights, miniaturisation generally, and the huge surge of interest in the sector, means some truly affordable and innovative products are hitting the market, products like the Chauvet DJ GigBAR IRC, reviewed here today.

At first this unit reminds me a lot of the American DJ Dotz TPar system we reviewed recently, in that you get a tripod, a bar with four main attachments on it, a footswitch and a remote control, complete with carry cases: A true “all in one” system. But actually, that system from American DJ is more like Chauvet DJ’s COREBar, in that it essentially packs “four of the same” lights. Not so the GigBAR IRC: With two Pars, two Kintas, four mini-strobes, and – yes – a laser, this fixture truly is trying to be everything in one.

It comes in two basic bags, one for the lights and one for the tripod/footswitch. The footswitch attachment is wireless, which is a nice touch, and there’s also a remote control, also wireless (there’s a small aerial on the top of the unit to extend the wireless range of the footswitch to about 30 metres).

Setting it up just involves securing the stand, placing and tightening the unit on top, and plugging in; as it can work as a master or slave with DMX, or (more useful to our audience, I’d suspect) as an all-in-one unit. When working in “standalone” mode like this, it can be put in an “auto” mode or set to cycle in time to the music. It’s easy enough to familiarised yourself with how to switch between the various modes on the back of the unit, on the supplied remote control, or via the footswitch, and once you have it’s pretty much plain sailing from there on in.

We found the four “traditional” lighting units here to be bright, varied and flexible, able to cover a largish dancefloor area easily due to the ability to alter angles. It is important to set it up high enough, not only because that gives you more reach for each light, but also because that laser should be going off over people’s heads, not into their eyes. Also if you have a smoke machine you’ll get far more from the laser (that includes all lights, but the laser especially).

The laser is green only, and while I am going to admit it’s hard to test how effective it is in our small studio, we were really excited by the fact that it’s included at all – what a great thing to be able to throw in to the mix at this price point! The strobes, while small, are going to be fine for smaller dancefloors and again are something you’d maybe not expect at this price point.

We liked the fact that there is a power out, too, because it means you can link additional units in series to avoid running power leads more than necessary, especially useful when you’re limited in the number of sockets available to you in a venue. We also think it was thoughtful for “L” brackets to be included for mounting the GigBAR IRC more permanently, suspended from trussing etc.

You can choose from par, kinta, laser or strobe and most combinations thereof, and choose different par and kinta red, green and blue values to vary things up, and we thought the foot pedal especially was a great idea for instant blackout ad easy switching things up, especially as unlike some, it is wireless (remember to point that antenna up).

For the money, this is great. Of course, you’re not going to be able to light a large venue with one of these alone (all the lights are still coming from the same place, after all), and none of these lights alone is particularly powerful, but as a unit, it offers an awful lot for a low price. A laser and strobes plus four traditional effects in just one easy to put up and break down package is well worth acknowledging, because to our knowledge nobody’s done this before.

Downsides? It would have been nice to see an additional laser colour; the cases need treating with care or they won’t last (watch those zips); and of course it’s built to a price, as you’d expect at this level. But for light use and in smaller venues, it’s got what you’d need.

So should you buy one? Well, if you’re a part-time working DJ or serious hobbyist, or you want something to really turn heads at house parties, it’s excellent. If in additional you think you’ll only want to make a single lighting purchase, then again, it’s pretty exhaustively all you’ll need (maybe get a small smoke machine, too). It isn’t such a good idea if you want to buy a first lighting unit then start adding more pieces later, because in that case, you’re better off buying each type of lighting separately, and of course you can focus in more on the quality of each piece, too (naturally, it’ll end up costing you considerably more that way). It’s really down to how serious you are and the budget you have.

Overall, the GigBAR IRC is great value, a lot of fun, and for many DJs who’ll have it as their one and only lighting purchase ever, it’s going to be very tempting indeed.

Do you own a Chauvet DJ GigBAR IRC? What are your impressions of it? Is this the kind of unit that could tempt you to invest in lighting? Please share youre thoughts below. 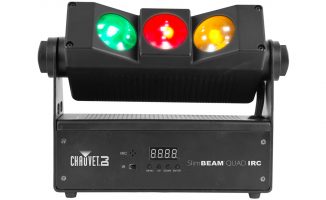 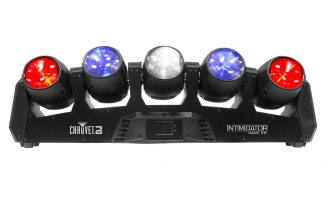 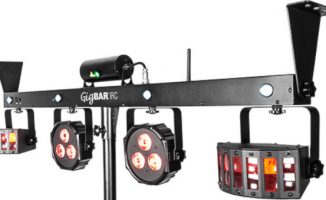