Livid just launched a Kickstarter campaign for a new pocket-sized controller. The Minim is a wireless hardware device consisting of 21 buttons, a touch strip, and 3D motion sensors. The controls are pressure-sensitive (no word yet which of the buttons are), and it ships with a standalone app that bridges Minim’s controls with third-party music software.

Livid has always been about making functional, rugged controllers that act as blank slates – download mappings for your favourite DJ / music production apps, or make one yourself. As such, a controller like the Minim is meant to be used for a variety of tasks and apps, including mobile music production on iOS, control of your digital audio workstation, or even as a controller for your DJ software’s sampler.

At a form factor not much larger than an iPhone, the Minim looks to appeal to beatmakers on the go without taking up too much backpack (or pocket) space.

Check out the promo video below to see it in action.

• The Minim is currently seeking funding, and you can find out more in its Kickstarter campaign.

What are your thoughts on a controller like this? When was the last time you bought a modular controller that wasn’t meant for any specific DJ app / software? With new developments like Stems, do you think we’ll see a renaissance in controllerism? Let us know your thoughts below. 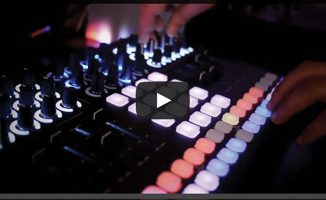