Ever seen a DJ at a massive club rave / festival and thought: “That could be me, if only I’d put more time, effort, dedication in…” Most of us have at some time, so I’m pretty sure you have too. And I’d like you to stop. Right now. Let me try and explain why…

There’s nothing wrong with dreaming of being in front of thousands of people, but you’re setting yourself up for disappointment if you always compare where you are now in your career (eg your bedroom, the hole in the wall joint down the street, your mate’s mum’s country social), with where your idols are: Onstage with their hands up to a crowd that’s lost the plot.

You may even be thinking the only thing that’s lost at this point in your career is you. “Why can’t I be like them? Is there a secret to the success of the Beatport Top 100? All they ever do is play a track and wave their hands up in the air, I can do that and more! So why shouldn’t it be me?”

It’s perfectly normal to have these thoughts, but watch out – you’re walking down a dangerous path laden with envy, discontent, and even potential anger towards other DJs, whether it’s your college pal DJ Dave who’s gained local fame, or the next big superstar who’ll shake up today’s EDM generation.

Whenever you see a DJ having the time of his or her life behind the decks, it’s easy to draw a direct comparison between the two of you – after all, you could do exactly the same thing as he’s doing (mixing, beatmatching), maybe even better.

But here’s something we don’t realise straight off the bat, something that behind all the fist-pumping and heart signs isn’t so obvious: What you’re experiencing is the end result of a ludicrous amount of work that DJ has spent honing his or her craft, learning how to crowd read (or in festival mainstages, learning how to produce), and learning how things work in the music business.

Heck, even celebrity DJs have to put in some elbow grease to at least know a thing or two about what they’re doing (though arguably, the majority of the work is PR and marketing). What you’re witnessing is the “victory lap”.

I’m not saying you haven’t done your fair share of work behind the scenes to step up your DJing and to get your name out, but what you’ve got to realise is that a DJ who’s been able to attain this level of success and play all these big shows has put in a crazy amount of time, work, and even money to get to the point where they can distil months (even years) of their life’s work into one 60-minute set. It’s like the ultimate payday: You cash in your cheque, and you get to have a ton of fun without having to spend it.

I think this is the appeal of DJing on a grander scale, and one that the EDM marketing machine uses to full effect: With software, it’s never been easier, cheaper and faster to get into DJing today, but the work needed to reach Erick Morillo / Tiesto / Danny Avila levels of fame and performance skill remain the same – you’ll probably work harder than you ever have in your entire life to get to it.

You can learn to manually beatmatch in a few days, but going beyond the bedroom / playing your 10 year high school reunion demands a different kind of dedication to both the craft and business of DJing, the bulk of which is terribly unglamorous and often relegated to less exciting trade papers and music journals.

Don’t believe what anyone tells you: Succeeding as a DJ is hard work, especially all the stuff that goes behind it. It’s just not the shortcut to fame, fortune, and pretty girls that many make it out to be.

It’s just the tip of the iceberg

DJ performances are like an iceberg: What you see in Tomorrowland or Ibiza, the YouTube videos of people going crazy – that’s just the tip. It may look like a very large piece of the iceberg, but underwater is an even larger, exponentially denser portion of that iceberg.

Another metaphor is an athlete’s highlight reel: We see five minutes of the best slam dunks, hat tricks, and saves, but none of the years of training, injuries, and failures that had to be plodded through to achieve those golden moments.

When you see another DJ crushing it on Instagram behind a four-deck CDJ2000nexus set-up complete with whizzbang effect units, it’s all too easy to get discouraged with your tiny plastic controller and call it a day. Don’t! They’ve also been through discouraging and disheartening moments like you, and probably even a whole lot more. Beating yourself over why you haven’t achieved the same level of success will erode your confidence over time and may even turn you spiteful – it’s a slow burn, and before you know it you’ve started hating other DJs out of envy.

The solution: Your DJ journey is your own

I wrote this post because I’ve felt this way many, many times before, even with other pursuits aside from DJing. It’s only in the last few years I’ve learned how to deal with it: Instead of comparing yourself to DJs who are killing it right now, you can appreciate how far they’ve come, maybe even take a thing or two from their playbook, but what’s important is you’ve got to train yourself to keep your head down, focus on your own goals, and live your own hustle because every DJ, and every DJ career, is different from the next.

This last bit is at the core of this shift in mindset, because no matter how much we compare ourselves to other DJs, it essentially doesn’t hold water because we’ve all got different tastes, proficiencies, and end goals in mind. The sooner you understand and take this to heart, the more open and less judging you’ll be of other DJs, too.

Your DJ journey is your own. The next time you see a DJ throwing cake or paddling through the crowd in a rubber raft, you can criticise the antics for sure, but don’t judge based on that alone: Recognise the hustle and use it as fuel for your own voyage.

Have you felt seriously lacking compared to DJs you admire? Ever felt jealous of other DJs in your area who are more successful than you are, even though people say you’re the better spinner? Think the DJ biz is unfair? We’d love to hear your thoughts (and feelings), so please share them with us below. 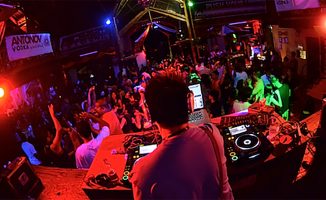 The Proven, Secret, Time-Saving Trick Guaranteed To Get You DJing Success