Ahead of BPM 2015, Reloop has just announced the latest addition to its RMP range of CD/USB/Midi hybrid media players/controllers, the RMP-4. It combines a standard CD slot with the ability to play from USB inputs (for example, a Flash drive or external hard drive). It also act as a Midi controller (natively for Virtual DJ, Traktor mapping also included), and has four performance modes too, with eight trigger pads controlling hot cues, hot loops, loops roll and sampler functions.

Reloop has added the option to link two RMP-4s together with a “smart link” connection, meaning sync (“master tempo”) between two units in a master/slave configuration, something available on higher-end Pioneer CDJ players for a while, but not on units at this price point before.

The RMP-4 ships with a basic database builder software app for Windows or Mac to analyse tempo and tags for quicker searching from USB, and offers a bigger range of additional functions than the previous RMP players, including Slip mode, reverse, vinyl brake and loud, club-ready output.

Who’s it aimed at?

While its display is basic (absolutely no waveform information, for instance), the player appears to be well built and professionally presented, and would suit mobile DJs, as well as software DJs wanting a more “pro” feeling Virtual DJ or Traktor rig than that offered by an all-in-one DJ controller. Such a rig (for instance, alongside a Reloop mixer), would of course then also offer the extra options of DJing from CD or USB, away from the laptop, as well.

Are you in the market for a media player like the RMP-4? Is there anything you see here that’d make you choose this one in particular? Please share your thoughts in the comments. 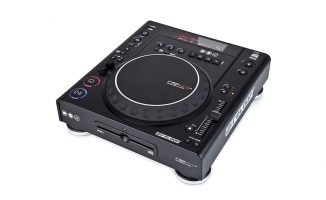