Last year Blue Microphones released a headphone that included an onboard headphone amplifier called the Mo-Fi. It was a hit with enthusiasts and those who liked the extra punch the onboard amplifier added, but for straight up DJing it was more than what was necessary. The amp also meant that the headphones would be quite heavy, and if you’re a very active type of DJ you’ll feel your head weighed down as the set wore on.

This year at NAMM Blue showcased the Lola, which solves these issues by coming in a form factor that does away with the headphone amplifier and headband adjustment features which allows it to weigh in at almost 50% less of the original Blue Mo-Fi. You basically still get the same great earcups, speaker drivers, and style that the Mo-Fi offers, but at a lower price point due to the absence of the headphone amp.

Check out our talkthrough below.

What do you think of these headphones? Have you tried the Blue Mo-Fis, or do you own them? Do you think these are a viable alternative? Let us know below. 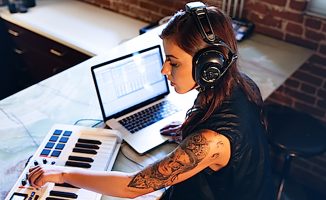