Not content with building disco lighting into its speakers, Numark has now added lighting to a DJ controller. The new model – just announced at CES – is called Party Mix, and three lights have been added to the rear of the unit to give a rather impressive light show (scroll down to see it in action). Party Mix also has a build-in audio interface, and comes in at very low price point, just US$99/£69.

As well as the built-in light show, Party Mix offers four pads for cue, loop and sample control, scratch mode, two-band EQ on each of its two channels, and gain controls (a welcome addition to any controller, although there are no on-board VUs). The controller’s backlit pads also pulse in time with the “floor show” lighting on the rear, making it a fun package for house parties and impromptu bedroom raves. It’s the kind of controller Hercules is probably kicking itself for not having rushed out first.

Check out the video we filmed while at the inMusic HQ last month.

• Party Mix comes with Virtual DJ LE, and is scheduled for availability Q2 2016.

What do you think of having lights built in to a DJ controller? And what about the low price point for a unit with built in audio? Let us know your thoughts below. 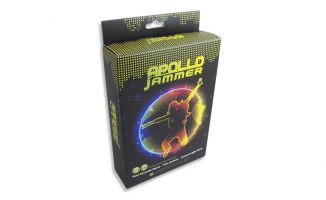