Allen & Heath gave a preview of its upcoming Xone:PX5 mixer last night at Berghain in Berlin. The Xone:PX5 is a four-channel mixer with a built-in sound card, onboard Xone:FX, three-band EQ, and filters that the Xone series is famous for. Each of the four channels has a switchable phono / line input, as well as USB. There’s also a mic / aux input with its own EQ section.

For outputs, there are XLR and RCA jacks for the master, 1/4″ booth outputs, and RCA and USB rec outputs. There are also FX sends and returns for using external effect units, as well as a pair of insert jacks for connecting effects to the master output.

Allen & Heath released the four-channel Xone:43 last year, and the sound card-equipped Xone:43C shortly after that. Those two mixers were relatively affordable, but lacked some advanced features that DJs have come to expect with modern mixers (ie Pioneer DJ DJM mixers). The Xone:PX5 looks to address that, with the inclusion of the built-in Xone:FX and the more common three-band EQ layout (the Xone:92 has a four-band EQ, for instance).

Check out the photo gallery below (all photos from Mijk Van Dijk / Bonedo).

• The Allen & Heath Xone:PX5 is due later this year. Price forthcoming.

What do you think of this new mixer? Do the features interest you, or are they just “more of the same”? Let us know below. 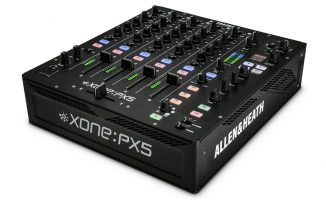